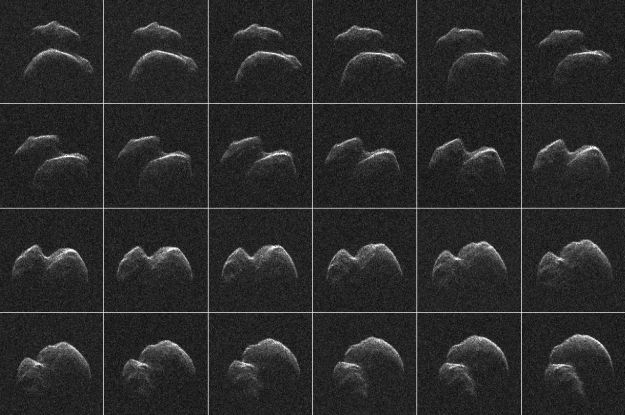 Some NASA images of the rock that’s missing us today…

A very large, very peanut-shaped asteroid whizzed past Earth on Wednesday, about 1.1 million miles away. For perspective, that’s about 4.6 times the distance to the moon. That’s razor-edge close compared with the vastness of space, but in our human-relative universe it’s waaaayyy out there….

Since I was sitting there at breakfast reading about it, I sort of knew already that the planet hadn’t been destroyed. But I read on with great satisfaction nevertheless:

Let us, for a moment, consider a scenario in which a 0.8-mile-wide asteroid strikes Earth.

First, the magic number for total apocalypse is 60 miles. That’s how big an asteroid would need to be to wipe out human life.

This asteroid is far from that number, but if it hits, let’s say, Washington, D.C., it’s large enough to destroy everything and everyone from New York City to Raleigh, N.C. (I apologize to the people of Raleigh for dragging you into Washington’s apocalypse.) The thermal radiation radius would be much larger….

I guess that would teach North Carolina not to pass dumb ol’ bathroom bills, huh? I mean, this would be is almost as bad as not getting to host NCAA games.

Now, if you want to see a good guess about what the impact of a 60-miler would look like, check the following video. Then go on and have a nice day…

4 thoughts on “An asteroid didn’t destroy Earth today. So we’ve got that going for us. Which is nice…”