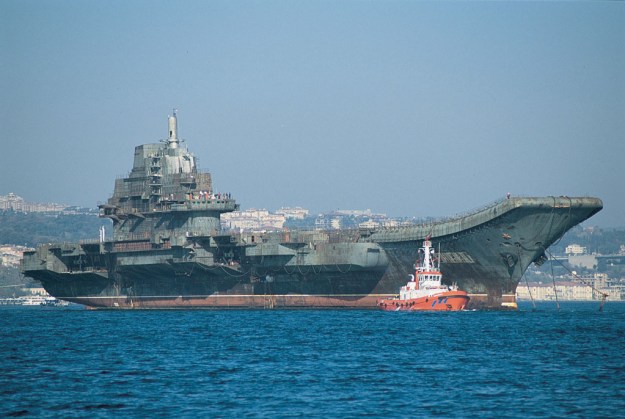 Up until now, China just had this busted-a__ used one they got from the Russians.

I suspect they do. Unlike us, they don’t have so many that they can afford to mislay one.

Anyway, for China this is a big step, since they only had one carrier before, and it was second-hand:

BEIJING — China has launched its first aircraft carrier built entirely on its own, in a demonstration of the growing technical sophistication of its defense industries and determination to safeguard its maritime territorial claims and crucial trade routes.

The 50,000-ton carrier was towed from its dockyard just after 9 a.m. Wednesday following a ceremony in the northern port city of Dalian, where its predecessor, the Soviet-built Liaoning, underwent extensive refurbishing before being commissioned in 2012, the Ministry of National Defense said.

Development of the new carrier began in 2013 and construction in late 2015. It’s expected to be formally commissioned sometime before 2020, after sea trials and the arrival of its full air complement.

The carrier program is a key part of China’s naval expansion at a time when it is looking to beef-up its regional military influence to match its economic might. While China says it maintains a defensive military policy, its ambitions are rattling some neighbors who see Beijing as fueling already enflamed tensions in the region….

On the one hand, such a milestone is laughable. I mean, look at Japan: How many carriers did they lose in a single day, back in 1942? Here we are 75 years later, and China’s launching its first one? (Of course, building and deploying a state-of-the-art carrier is vastly more complex and expensive than it was back in the day.)

Also, think how enormous a challenge lies before a country that does not have generations of aviators who have landed on carriers, or a force of support personnel skilled at running the process of underway air operations.

On the other hand — China, with a demonstrated desire to throw its weight around in the region (and a carrier gives you a great deal of weight to throw), is committed to moving dramatically forward in its capacity to project naval power. It stands out in this regard globally. Britain, for instance, currently has zero operating carriers, although they have some new ones in the works. (Yes, that Britain — the one that used to rule the waves. Try to imagine the Brits in Nelson’s day without a single line-of-battle ship.)

So, you know… significant development here…

9 thoughts on “OK, so China has built a carrier. Do they know where it is?”