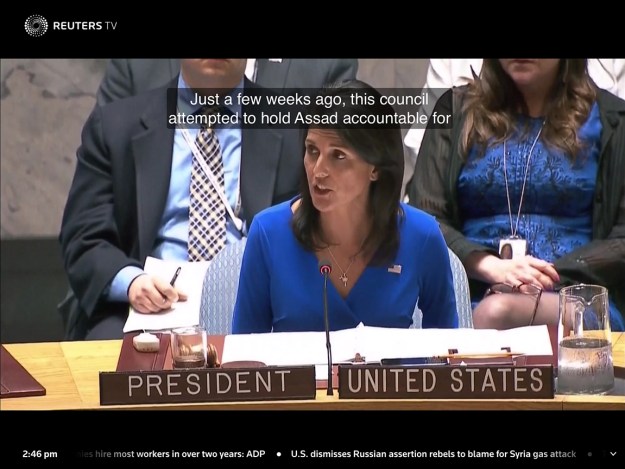 My wife was watching her Reuters TV app yesterday, and at one point she said, “Why does it say ‘president’ under Nikki Haley’s name?”

I thought at first that she meant Reuters had made a mistake in the chyron under the video, and thinking there might be a light blog post in it, I downloaded the app myself just to watch the clip.

Turns out that no, Reuters had made no mistake. And the label wasn’t part of some ephemeral electronic crawl, but an actual, physical sign in front of her that said “PRESIDENT,” next to a sign just like it that said, “UNITED STATES.”

This juxtaposition would have freaked me out a bit a year or two ago, as it did whenever I heard or read national pundits referring to her as running-mate material. Only more so. But now, Donald J. Trump actually is president of the United States, and I would far rather see Nikki — or almost any reasonably normal person — in that job.

As for the “PRESIDENT” sign, that’s easily explained. She’s taking her turn this month presiding over the Security Council (another thing that might have freaked me out a year ago, but as I explained before, things have changed).

But let’s, just for the sake of variety, speak for a moment to the substance. If you didn’t see and hear her speech before the Security Council, here it is:

That clip culminates with her line that’s been quoted a good bit over the last 24, “When the United Nations consistently fails in its duty to act collectively, there are times in life of states that we are compelled to take our own action.”

Which sounds ominous, of course. But it seemed quite natural after she stood up and displayed those pictures.

The good news is that the Steve Bannon isolationist America-First nonsense seems to be fading into the background this week. The bad news is that we might soon have (more) troops fighting in Syria, a country where you can’t walk across the street without tripping over one of Trump’s buddy Putin’s people.

So, a tense situation.

But that’s not my point in this post. What is my point? I guess it’s to say that at this difficult moment, Nikki did a pretty good job… 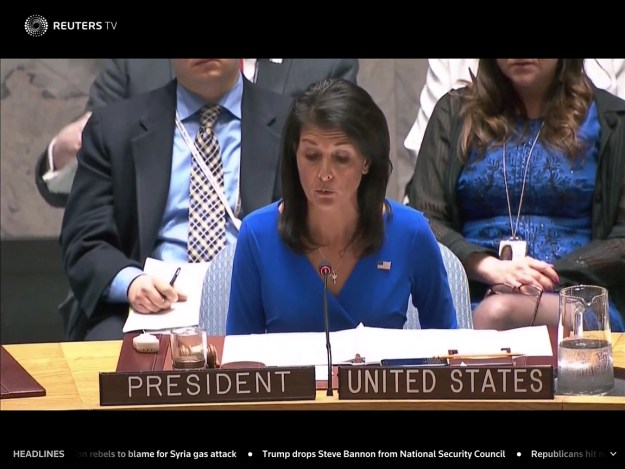