The only thing I saw over the last few days that was newsworthy was that a huge part of the Surfside Beach pier was missing.

It was the first time I’d been there since Hurricane Matthew, and it was weird to see people playing in the surf out past the end of the pier.

Apparently, local folks have been having trouble figuring out whether and/or how to rebuild it, and it probably won’t be up and operating until next year sometime, at best.

It’s amazing anyone would even consider not rebuilding. But then, I remember when the pier played a more central role in the town’s life. When I was a kid, and even later when my older kids were young, that was the place to go. There was the pier, and the bingo hall, and the arcade, and the little family-scale amusement park, all right there together. Back in the days before cable TV, there wasn’t anything to do in the evening in Surfside besides going to the pier — unless you wanted to go down to Murrells Inlet and wait an hour to be seated for dinner.

Here’s what it looked like back then. I wish this had been taken from a different angle, so you could see the arcade and amusement park better — as opposed to the parking lot (which used to be free, by the way) — but you can see it would be the focal point of a sleepy, family beach town.

Still, I hope they get it together and rebuild. The pier may not be what it was, but I still can’t imagine Surfside without it. 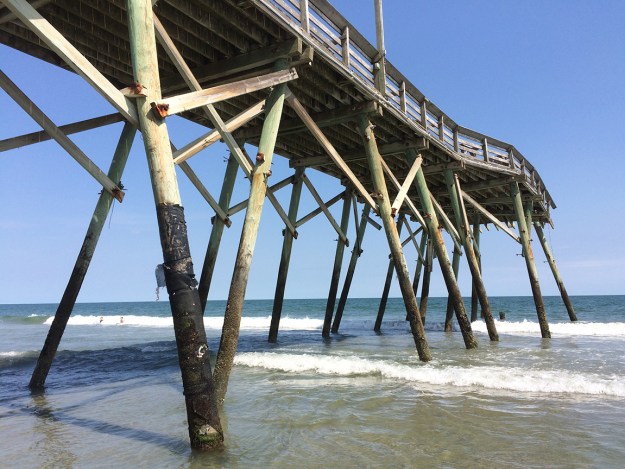 You know what it looks kind of like from this angle? One of those AT-AT Imperial Walkers from “The Empire Strikes Back.” To me, anyway…

31 thoughts on “What? Where did the Surfside Pier go?”