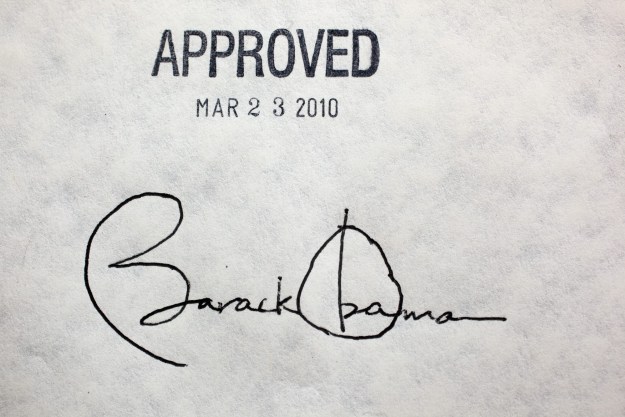 Basically, they’re trying to undo what this signature did.

They say Speaker Ryan has the votes now:

House Republicans are set to pass a controversial plan to revise key parts of the Affordable Care Act on Thursday, capping weeks of fits and starts to fulfill a signature campaign promise.

Final passage of the bill that would dramatically reshape the nation’s health-care system is expected by early afternoon. Attention will then shift to the more closely-divided U.S. Senate, where formal debate isn’t expected to begin until June….

So finally, they’re about to do what they found so easy to do, over and over, when they knew it would go nowhere.

Trouble is — and now that it’s in their power, many of them have started to realize it, which is why this has taken so long — this is not what America wants them to do.

Of course, many House Republicans will say America wants them to do it — because they define “America” as the extreme subset of a subset of people who vote in Republican primaries in sufficient numbers to scare GOP officeholders senseless. In other words, their actions are another illustration of the evils of gerrymandering.

But the truth is, actual America really doesn’t want them to:

President Trump and many Republicans intend to move forward with another effort to repeal and replace the Affordable Care Act, also known as Obamacare.

But according to a new ABC News/Washington Post poll, most Americans don’t want them to.

The poll, conducted between April 17 and 20, found 61 percent of respondents support keeping and working to improve the health care plan in place, while only 37 percent say they want it entirely repealed and replaced.

Ultimately 79 percent said Trump should invest in the Affordable Care Act’s success rather than expend time and energy ensuring its failure….

Of course, for the GOP, it’s all about the 37 percent, which is more than enough to cause them to win or lose a primary.

That poll was from April 25, and is consistent with others over the last few months. If you’ve seen some more recent ones, let me know…

39 thoughts on “Finally, House GOP set to do what America does NOT want it to do”