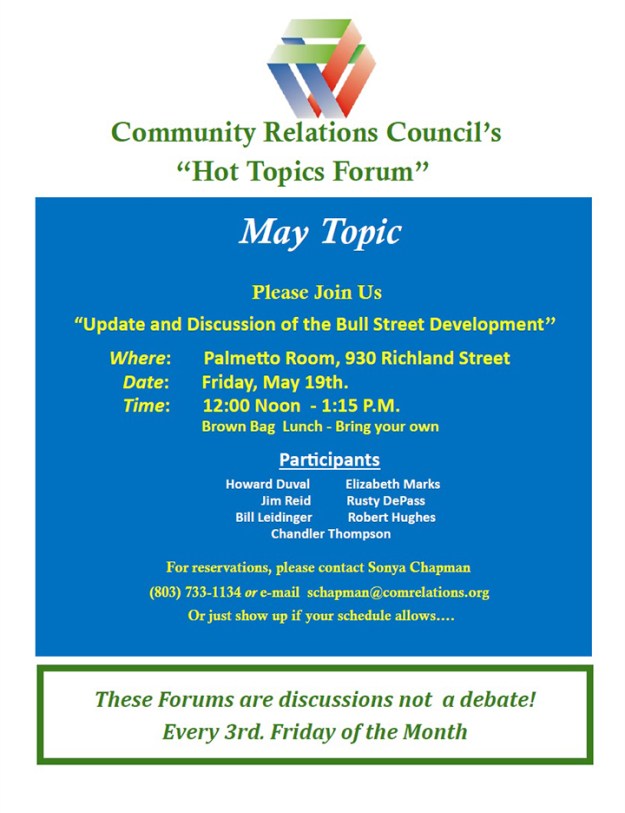 As some of you may know I serve on the Greater Columbia Community Relations Council. We’re about fostering constructive, civil conversations about issues facing the community. As you also may know, we’ve sponsored some forums over the years on such issues as the Penny Tax and strong mayor referenda, as well as candidate forums.

Lately, we’ve started a monthly series of informal discussions on “Hot Topics” that are current in the community.

This month, after reading Jeff Wilkinson’s recent story on how the Bull Street development was coming, we decided to sponsor a session on that, and it will be at noon tomorrow (Friday) at the Greater Columbia Chamber of Commerce offices.

I’ll moderate the discussion. Panelists include:

I have no idea who, if anyone, will come out to hear the discussion or ask questions of the panel, but if you’re interested, come on out.

I’d tell you more, but I haven’t been the organizer — I’m just moderating. So this is all I know. I’ll show up and see how it goes.