A lot of readers don’t like George F. Will. They find him haughty, imperious and supercilious, and his writing dense, showy and vague.

But when he takes some of those qualities and packs them into a pointed diagnosis of just what is wrong with Donald J. Trump, he can be a pleasure to read. And edifying to boot.

Take today’s column, “Trump has a dangerous disability,” in which he writes:

It is urgent for Americans to think and speak clearly about President Trump’s inability to do either. This seems to be not a mere disinclination but a disability. It is not merely the result of intellectual sloth but of an untrained mind bereft of information and married to stratospheric self-confidence….

Amen to all of that, especially that first sentence. That, after all, is the problem: Not that Trump might have the wrong idea about this or that, but that his brain doesn’t really do ideas, can’t process or express them clearly, and lacks the informational foundation for forming them in the first place. 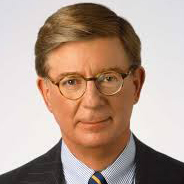 Absolutely. And here’s the big finish:

Americans have placed vast military power at the discretion of this mind, a presidential discretion that is largely immune to restraint by the Madisonian system of institutional checks and balances. So, it is up to the public to quarantine this presidency by insistently communicating to its elected representatives a steady, rational fear of this man whose combination of impulsivity and credulity render him uniquely unfit to take the nation into a military conflict.

I share this partly because the piece was a pleasure to read, but also because some of you seem genuinely puzzled that I don’t just accept that Donald Trump is president of the United States, calm down and move on.

I don’t do that because I see clearly that it is my duty to be “insistently communicating to [my] elected representatives” just how unacceptable this state of affairs is. Every citizen who perceives the danger has an obligation “to think and speak clearly about President Trump’s inability to do either.”