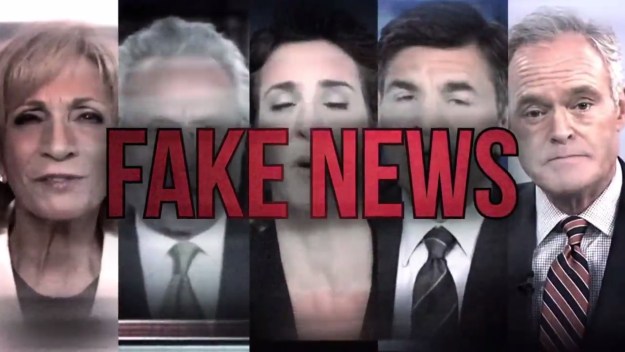 The split-second in question.

This intrigued me, because it poses one of the toughest questions I used to deal with as an editor:

In a self-congratulatory ad marking his first 100 days in office, President Trump labels major television networks “fake news.” So CNN is refusing to sell the president airtime to show the commercial.

I’ve been there. But as an editor, rather than as a gatekeeper for ads.

As editorial page editor, a substantial portion of the space I was in charge of was devoted to copy generated by people who didn’t work for me — op-eds, and letters to the editor. We always had a lot of copy to choose from in filling that limited space, and we gave priority to fresh views, and particularly those that disagreed with something we had said.

If we had just criticized someone editorially, and that person asked for some of our space to respond, that response went to the front of the line.

We especially weren’t going to let people use our space to mischaracterize what we had said. We went to a lot of trouble to shape the positions we presented to readers and we agonized over exactly how to present them — we weren’t about to let people claim we’d said something we hadn’t said, and give the lie credence by publishing it on our pages. We wouldn’t let a writer say, “They called me a big, fat idiot” when we had not even implied that the gentleman was big, fat, or any kind of idiot.

Trouble is, it’s not always that simple. Sometimes you write X and someone reads Y, no matter how hard you worked to make your point clear. Still, we weren’t going to let people waste our space arguing with Y when no one had said or even suggested Y. Which quite often they wanted to do.

This led to some pretty intense discussions with the writers, and on occasion to an impasse in which the writer withdrew the piece and went around telling anyone who would listen that those jerks at The State refused to publish a dissenting opinion.

Which of course was another lie. We very much wanted alternative, and especially dissenting, opinions. We just weren’t going to allow alternative facts.

Argue all you want with what we said. But don’t waste everyone’s time (and more to the point, our valuable space) arguing with what we did not say.

Not that facts and opinions are always easy to separate. We had some pretty intense arguments among us editors over that. I’d be reading a proof, and stride into the office of the editor who had allowed the piece onto the page and say, “He can’t say this; it’s not true.” And my colleague would say, “It’s an opinion, not an assertion of fact.” And we’d go ’round and ’round, and I’d generally err on the side of letting the reader have his say. And the next day kick myself when another reader would point out that something false had been said on my page, and that we had a sacred duty not to allow that. And I’d be like, Yeah, but he really thinks it’s true, and he and a lot of other people act and vote on that assumption, and if I’m going to educate all readers as to how such people think so that we can all understand each other, they need to be able to present their arguments… And sometimes I’d convince myself, and sometimes not.

Anyway, these kinds of questions are not easy. Telling truth, and making sure what others say on your medium is true, isn’t easy…