I noted in passing this morning that Nancy Pelosi was being very sensible and open-minded when she split with her party’s new chair on whether Democrats would be allowed to think for themselves on abortion. An excerpt from the story I read, demonstrating the very human, respectful approach she took: 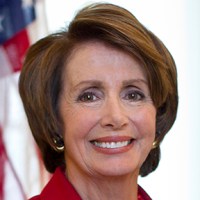 “I grew up Nancy D’Alesandro, in Baltimore, Maryland; in Little Italy; in a very devout Catholic family; fiercely patriotic; proud of our town and heritage, and staunchly Democratic,” she added, referring to the fact that she is the daughter and sister of former mayors of that city. “Most of those people — my family, extended family — are not pro-choice. You think I’m kicking them out of the Democratic Party?”…

Of course, there are always enforcers of political dogma ready to jump down a reasonable person’s throat. The most ironic such rebuke I’ve seen comes from the oxymoronic Catholics for Choice, which can always be relied upon to put a surreal twist on the news:

As Catholics, we are dismayed by Minority Leader Pelosi’s out of touch and self-serving statements that throw women and their right to make their own moral decisions under the bus.

Let’s be clear—unity in diversity of thought is an important value in America and what any political party should seek to nurture. However, a party that claims the mantle on social justice and civil liberties cannot turn its back on women’s moral autonomy and the right to make conscience-based decisions. Women’s rights are human rights and they cannot be traded away based on short-sighted political calculations. Minority Leader Pelosi’s claim that ‘abortion is a fading issue’ is also downright irresponsible when women’s access to abortion services is under attack across America by restrictive legislative proposals and efforts to limit providers, especially for the poorest women….

How do you take a statement like that seriously when it starts, “As Catholics…?” But of course, the purpose of this organization is to convince you to accept that proposition.

I ask you: Did any part of that statement feel “Catholic” to you? In style and voice, did it sound like something, say, Pope Francis would say? No. In tone and word choice, it read as though it had been written by an indignant college sophomore interning at NARAL.

A digression: I may need to borrow someone’s Dictionary of Current Ideology. Set abortion aside. How does an individual person have something called “moral autonomy?” Is not the essence of morality that we are responsible to one another for what we do? (Where do they get this cant?)

Nice try, Nancy, attempting to make your party a little more tolerant and open. This world is full of people who simply will not stand for that sort of thing…

3 thoughts on “Oxymoronic group blasts Pelosi for being tolerant”