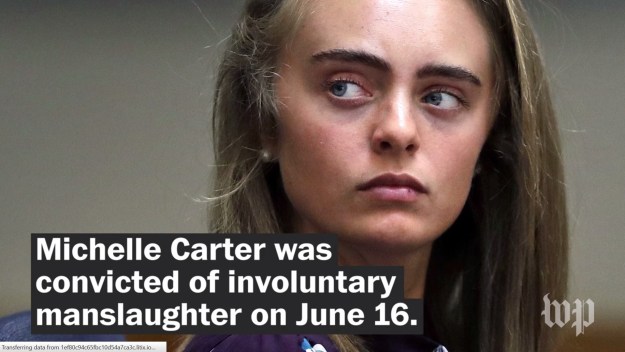 I generally stay away from “people being beastly on the internet” stories because I’m just too busy with politics, policy and pop culture.

But this past week there were two horror stories that totally boggled what little mind I allowed to get distracted by them. Ironically, we had just had a discussion about cruel and unusual punishment when a prime candidate for such treatment was in the news: The monster who dangled his baby out a 15th-story window in a bid for Facebook “likes.” (Note that my link is to the Daily Mail, which seems the perfect setting for such a story.) You know how FB recently added those alternatives to “like”? For this guy, they need to add an “If I ever meet you in person, I’m breaking both of your arms so you can’t do that again” button.

Then there was the case Kathleen Parker wrote about under the headline, “Can words kill people?” It’s about “Michelle Carter’s conviction last week on involuntary-manslaughter charges in the 2014 suicide of her 18-year-old boyfriend, Conrad Roy III.” Excerpt:

At the time of the suicide, Carter was a 17-year-old whose boyfriend spoke frequently of taking his own life. He finally did by filling his parked truck with carbon monoxide. Mind you, Carter was nowhere near. She had no physical hand in the death, although she did text and call Roy, urging him to go ahead and do it. When he had second thoughts and got out of his vehicle, she instructed him to get back in.

If Carter’s words were Roy’s death sentence, then his death was hers, if not literally, then, indeed, virtually. For her clearly tangential role, which one could as easily interpret as drama-queen excess, Carter faces up to 20 years in prison. Sentencing is scheduled for Aug. 3.

It is easy to feel outrage at what transpired. Prosecutors introduced hundreds of text messages between Roy and Carter in which she encouraged him to end his life and sometimes taunted him for his lack of courage. In one, she wrote: “You’re ready and prepared. All you have to do is turn the generator on and you will be free and happy. No more pushing it off. No more waiting.”

This alone is enough to make one dislike or even despise Carter. But is it enough to blame Carter for Roy’s death?…

Kathleen concluded that no, it isn’t. I was unsatisfied with that conclusion.

The columnist asks, “Manslaughter? Evil? Or just dumb?” The best of the three would seem to be evil. You read the words she wrote to this boy on the edge, and your blood runs cold. Mine does, anyway.

In terms of how to approach such a thing in the criminal justice system, manslaughter seems inaccurate. And I’m not sure how the law works on aiding and abetting. What should be the charge for being a cheerleader at a boy’s death?

There is evidently something essential missing in this girl, and at the very least it seems she should be confined somewhere until experts can figure out what it is, and whether it’s possible to fill that void.

Because anyone who will do what she did — repeatedly, insistently, matter-of-factly — is dangerous….

8 thoughts on “About that question: Can words kill people?”