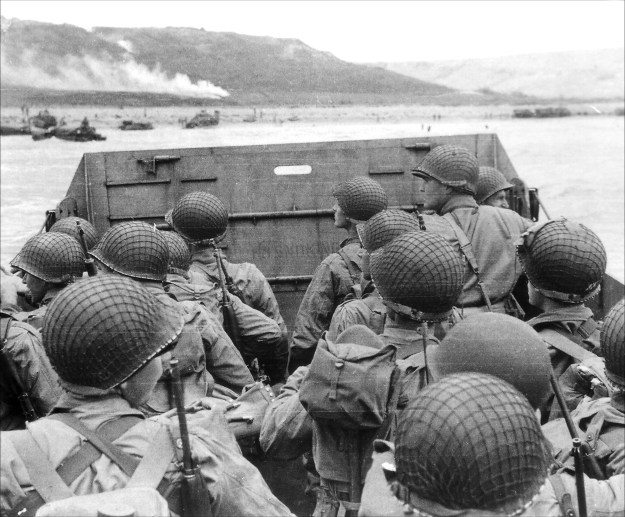 In combat, you have to learn to rely on the guy next to you. Sometimes, blogging is (slightly) like that — minus the danger.

I was worried that I wouldn’t have time today to write about D-Day, so Bryan Caskey did so on his blog and said I could refer y’all to it.

73 years ago, over 150,000 Allied troops landed on the shores of France, intent on reclaiming Europe from the German army that had overrun and occupied Europe. It was a calculated gamble, and the outcome was far from certain. In the early morning hours of darkness before the sun rose, thousands of men dropped from the sky in connection with the landings.

Of the over 150,000 Allied troops that landed that day, 4 received the Medal of Honor for their actions on that day. One of those men was Teddy Roosevelt’s son.

When the first waves hit the shore at Omaha Beach, they were immediately met with withering fire from fortified German positions. Omaha Beach is a curved beach, like a crescent moon, and it has high bluffs overlooking the shore. Accordingly, it was the most easily defended by the Germans….

All I’ll add for the moment is this story today about Andrew Higgins, whose little boats made down in New Orleans won the war — along with the M-1 Garand, the Jeep, the C-47 and all sorts of other legendary hardware:

At the New Orleans plant where his company built the boats that brought troops ashore at Normandy on June 6, 1944, Higgins hung a sign that said, “Anybody caught stealing tools out of this yard won’t get fired — he’ll go to the hospital.”

Whatever Higgins did, he did it a lot. “His profanity,” Life magazine said, was “famous for its opulence and volume.” So was his thirst for Old Taylor bourbon, though he curtailed his intake by limiting his sips to a specific location.

“I only drink,” he told Life magazine, “while I’m working.”

That Higgins was able to accomplish what he did — provide U.S. forces with the means to swiftly attack beaches, including on D-Day — despite his personal shortcomings is a testament, historians say, to his relentless talent and creativity as an entrepreneur….

I sorta kinda almost have a connection to the Higgins Boats — or I thought I did, but now I doubt it. From 1965-67, I lived on an old derelict Navy base down in New Orleans — or technically, across the river in Algiers. I lived there when I was 11-13 years old. Most of the base was shut down — my friends and I almost got caught by the Shore Patrol once when we broke into and explored one of the many abandoned WWII-era buildings.

Many years later, I read the account of a WWII Navy veteran who said he was sent to Algiers to learn to be a coxswain on a Higgins boat in preparation for the invasion of Japan. So I thought, So that’s what that base was for! But I can’t seem to find any references to that on the web. And come to think of it, a place located on the Mississippi River (the levee was a block from my home, and I regularly climbed it to catch catfish) wouldn’t be a great place to train guys how to navigate a boat through surf.

Anyway, to this day I regard the landings in Normandy on June 6, 1944, to be one of the most impressive things every attempted and achieved in one day in human history. So much could have gone wrong. Actually, so much DID go wrong — the bombers that were supposed to soften up the defenses missed their targets, paratroopers were dropped everywhere except where they were supposed to be, and no one seemed to know what a Norman hedgerow was like until our soldiers had to dig the Germans out from behind them.

But they got it done anyway. Astounding…