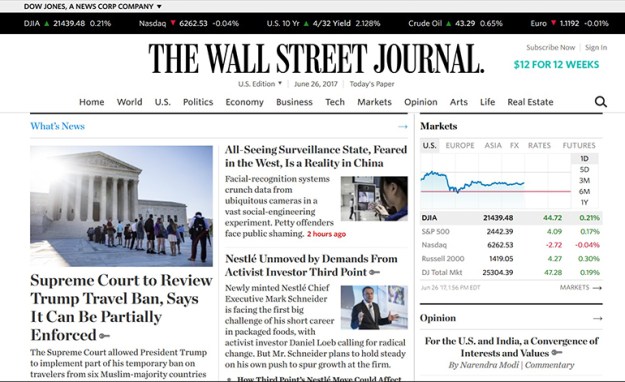 When I was in college, one of my journalism professors told me that The Wall Street Journal was perhaps the best-written paper in the country. I didn’t discover how right he was until decades later.

As editorial page editor, I had print subscriptions to the Journal and The New York Times, plus The Economist, Foreign Affairs, The Post and Courier, The Greenville News, The Charlotte Observer and so forth. And I’d try to at least skim the Journal and the Times (as about the only person on the board who wrote about national and international issues, I felt the need to keep up).

But I really got into the Journal when The State made a deal to distribute that paper along our circulation routes. As part of that deal, we got a certain number of comp copies, so I arranged to have one delivered free to my house, brought by the same carrier who delivered The State. I wanted to get the Times at home, too, but the guy who contracts with them in this area refuses to deliver on my side of the river, or so I hear (Samuel Tenenbaum, who also lives in Lexington County, drives to the Publix in Lexington each morning to get his copy.)

I really got hooked on it. This was during the years that Murdoch was turning it into a national-international reporting powerhouse as well as just a financial paper. Every day I looked forward to the three pages of opinion, and on the weekends there was the wonderful Review section, always a feast for the mind.

The Journal wasn’t just a boon to me; my wife took the old copies with her when she tutored a Somali Bantu boy whose family our church was sponsoring, to help him with his English.

But after I got laid off, I had to make a decision whether to keep getting it and paying for it myself. And somehow, I managed to scrape along and keep doing it until sometime late last year, when my subscription ran out and they were not giving me a good-enough deal to keep it going.

To give some perspective: For the last two or three years, I’ve been subscribing to The Washington Post for $29 a year. Online only, but that’s fine — not only do they not circulate here, but I read all my papers on the iPad now. By contrast, I’ve been offered “deals” by WSJ for as much as $400-plus a year.

I chalk that up to the Journal continuing to be a paper that people pay for through their work expenses — or, if they pay for it themselves, they can afford it. I can’t.

To be fair, they kept offering me “professional courtesy” rates, usually about $99 for six months. And I’d think about it and shake my head — $99 for a year, maybe (which I think they offered me in years past). But not six months. Not when I’m getting the Post for $29 a year, and at a time when Jeff Bezos has been investing in the newsroom, and the paper’s political coverage is at least as good as it has ever been. Meanwhile, the WSJ has ditched the Arena section I use to enjoy on Fridays.

It was easy to pass up on these offers at first because, for some reason, the Journal was still letting me read the paper on my iPad app. Since that’s the way I prefer to read it anyway, no problem. But eventually — several weeks ago — they got wise and cut me off there, too.

So, I started reading The Guardian in the mornings in place of the Journal. It’s free, although they keep asking me to be nice and pay. But they don’t do it the right way. I think The Guardian‘s a great read, but they pitch it as though I’d want to support their editorial view, and I can’t go there.

Then, last week, The New York Times came at me with a proposition I couldn’t refuse — I could get the whole paper online for $7.50 a month — or $12.20 a month if I wanted the crossword, and one additional subscription for a friend. Why was this a good deal? Well, I was already subscribing to the NYT crossword iPad app, and was paying $6.99 a month for that alone. (Which I thought was really exorbitant, since I get The New Yorker on my iPad for only $5.99 a month, but hey, I enjoy the crosswords — at least, I do on Mondays, Tuesdays and Wednesdays.)

So basically, I’d still get my crosswords, and then get the rest of the paper for only $5.51 — or $66.12 a year. With the offer expiring on Sunday, I pulled the trigger Saturday night.

Now, some of you will say — you won’t pay for The Guardian because of its editorial position, but you switch from The Wall Street Journal to The New York Times — the national icons of the right and left, respectively — as though they were interchangeable?

Yep. Because they’re both great, well-written and -edited papers that bring me the world, and offer me something I enjoy reading on every page. Including the editorial pages. I probably disagree with both papers’ editorial boards about equally. But the opinions, especially the op-eds, are lively and though-provoking. And I’m not one of these people who has to agree with a view to enjoy reading it — in fact, I don’t understand such people.

Anyway, it had gotten to where my favorite columnist in the WSJ was Bret Stephens — and he just moved over to the NYT. As I start reading the paper daily, I expect my favorites will be the ones who skew right — Stephens, David Brooks, Ross Douthat — even as my favorites in the WSJ were more to the left, on the rare days when such was to be had.

Anyway, y’all will likely see me citing stories in the Times as much as I used to from the Journal. (Y’all had probably long ago noticed that I point you to the Post a lot.) I’m sure y’all will give me a heads-up if you think I’m getting reprogrammed… 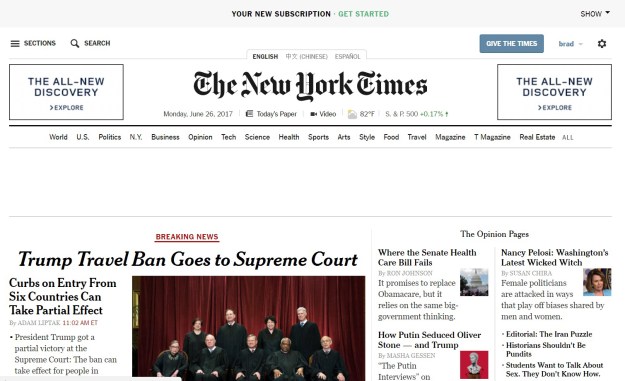