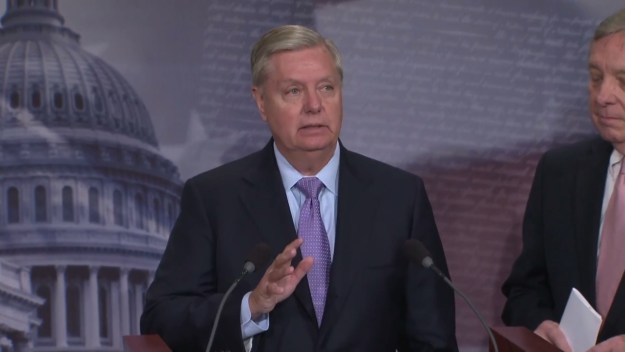 Even as I was saying that with his particular friend John McCain out of action, the country really needed Lindsey Graham to step up… he was doing so.

Today, he and Democratic Sen. Dick Durbin announced they were introducing the Dream Act. Here’s a release about it:

WASHINGTON — U.S. Senators Lindsey Graham (R-SC) and Dick Durbin (D-IL) today introduced the Dream Act, which would allow immigrant students who grew up in the United States to earn lawful permanent residence and eventually American citizenship.  These young people, known as Dreamers, have lived in America since they were children, built their lives here, and are American in every way except for their immigration status.  However, under current law they live in fear of deportation and have no chance to ever become citizens and fulfill their potential.

“These young people have lived in America since they were children and built their lives here,” said Graham.  “There is support across the country for allowing Dreamers — who have records of achievement — to stay, work, and reach their full potential.  We should not squander these young people’s talents and penalize our own nation.  Our legislation would allow these young people – who grew up in the United States – to contribute more fully to the country they love.  They have a powerful story to tell and this may be an area where both parties can come together.”

“Hundreds of thousands of talented young people who have grown up in our country are at risk of deportation to countries they barely remember.  I’ll do everything in my power as a United States Senator to protect these Dreamers and give them the chance to become American citizens so they can contribute to a brighter future for all Americans,” said Durbin.  “I first introduced the Dream Act 16 years ago and I’ll continue fighting until it becomes the law of the land. I thank Senator Graham for partnering with me in this bipartisan effort.”

The Dream Act would allow these young people to earn lawful permanent residence and eventually American citizenship if they:

We’ve needed both Graham and McCain’s leadership on immigration, which had waned somewhat in recent years. Because if they don’t step up, who among the majority will?

Here’s video of Graham’s and Durbin’s announcement (It doesn’t actually start until 23 minutes in.):

8 thoughts on “Meanwhile, Graham steps up with Dream Act”