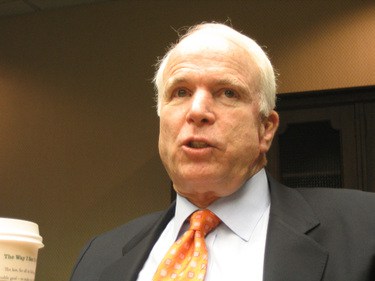 File photo from an interview with McCain in The State’s editorial board room in 2007.

I don’t just mean in terms of whether he lives or dies — although I hope and pray he recovers. We can’t even afford to have him on the injured list.

The Washington Post had a good piece this morning that got into why John McCain matter so much to this country, particularly at this dicey moment in our history. Some excerpts:

McCain’s significance inside Congress is hard to overstate — and his absence, however long, will reverberate across the Capitol.

The Arizonan’s illness leaves Senate Majority Leader Mitch McConnell (R-Ky.) — and by proxy President Trump, who has openly mocked the Arizona senator — with 51 votes, the barest of majorities at a time when Republicans are divided on such issues as health care, taxes and defense spending.

McCain’s absence would also deprive the Senate of its moral conscience on many key issues, particularly in the ongoing investigation of the Trump campaign’s potential involvement in Russian meddling in the 2016 campaign….

McCain, a prisoner of war in Vietnam and a two-time presidential candidate, is known for his unfiltered opinions and willingness to buck Republican Party orthodoxy. Along with Sen. Lindsey O. Graham (R-S.C.), perhaps his closest friend in the Senate, McCain has become one of Trump’s leading Republican critics, particularly on issues of foreign policy and national security….

McCain has staunchly defended Trump’s national security team — he has particular respect for Defense Secretary Jim Mattis and national security adviser H.R. McMaster. But McCain has criticized the president for campaigning on a promise to fortify the country’s defenses without, in his view, devoting enough money to the task.

McCain has also criticized Trump’s apparent affinity for Russia and its president, Vladimir Putin, warning that Russia is an enemy that should not be trusted and becoming one of the earliest Republicans to lend his support to a congressional investigation of Russia’s ties to the election….

We need this guy. We really need him…

48 thoughts on “This country cannot afford to lose John McCain”