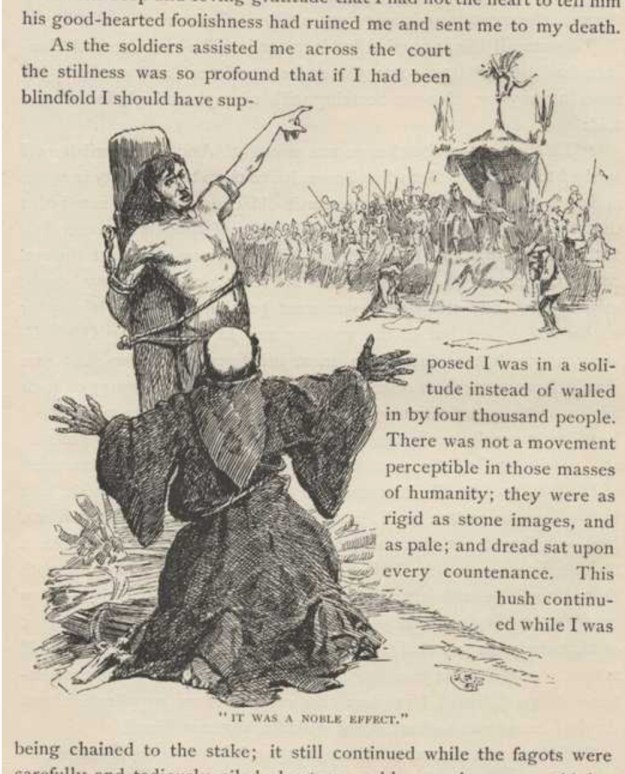 Hank Morgan tied to the stake: Illustration of the eclipse scene in Connecticut Yankee.

I will smother the whole world in the dead blackness of midnight; I will blot out the Sun, and he shall never shine again; the fruits of the Earth shall rot for lack of light and warmth, and the peoples of the Earth shall famish and die, to the last man!

I loved it that Cindi Scoppe cited one of my all-time favorite books in her column today.

Even though we worked together all those years, I don’t recall her ever mentioning Twain’s Connecticut Yankee. In fact, I don’t recall her speaking with interest about any works of fiction. Cindi’s too busy for fiction. She spends her evenings reading bills and legal filings, so she can knowledgeably dissect them in the paper.

I, too, have been thinking a lot about Hank Morgan, what with all this talk about the eclipse.

Ah, to have a gullible 6th century population so that I, too, might be able to control them with my knowledge of the coming moments of midday darkness! Morgan not only saved himself from the stake, but seized control of Arthur’s Britain by claiming credit for the eclipse.

What would I do with such superior knowledge? I suppose I could greatly increase my revenues by saying, “Advertise on my blog, or I will blot out the sun!” (Might as well. Nothing else seems to work. That is, my personal strategy of sitting back and waiting for ads hasn’t worked too well. I suppose there are other avenues.)

Of course, they didn’t have blogs in Arthur’s day. But that wouldn’t have stopped Hank Morgan — in no time at all, he had all the knights of the Round Table talking on telephones and playing baseball (in their armor). If Twain had written it a century later, he’d have made Clarence a webmaster.

I’ve got to go back and read that again. Fortunately, I have it on my iPad…

2 thoughts on “Advertise on my blog, or I WILL BLOT OUT THE SUN!”