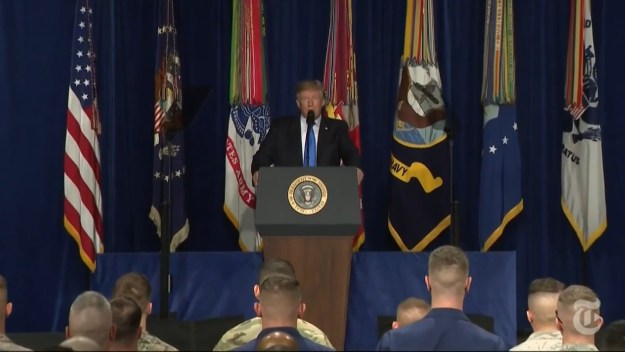 I missed Trump’s speech last night because I was writing that post about Jack Van Loan — and was surprised when I went back downstairs to find that it was over. I thought I’d catch at least some of it.

But I’m familiar with the gist. And since I got this response from Lindsey Graham today, I’ll use that as a device to get into the subject:

Graham: “Gloves Are Off Inside Of Afghanistan”

Ø  GRAHAM: “We’re going to make our decisions based on conditions on the ground, not on the arbitrary passing of time. So hats off to President Trump for not becoming General Trump. Because General Obama was a real lousy general, and that’s part of the mess we’re inheriting…” https://youtu.be/2oZhfvbGd9c?t=2m49s

First, let me say that while I, too, disagreed with him on Afghanistan, I would take President Obama — or either Bush, Clinton or Reagan — back in a skinny minute if it meant getting rid of Trump. And I could really do without the silly red-meat stuff about “gloves are off” and “the will to stand up to radical Islam.” It’s silly, and undermines serious people’s ability to take him seriously. He’s a smart man; he can express himself more intelligently, however much he wants to repair relations with what is euphemistically called “the base.”

Next, I’ll shift gears and express my great relief that for once, Trump seems to have allowed himself to learn from experts rather than going with his gut. That’s a big step. We’d be in a lot better shape if he’d learn to listen to ALL experts, and not just the generals — although listening to generals is a fine start.

Finally, I agree with Graham and Trump that setting deadlines to leave Afghanistan is the worst of ideas.

My rule of thumb is this: If we send troops into a situation with a departure date in mind, we shouldn’t send the troops in at all. Nor should we set dates for departure after we send them in. That makes it almost impossible to achieve military objectives, whatever the objective. (“Hey, enemy, just hunker down and wait until this date, and you can take over!”)

And that’s about it, except to say again that it’s a relief to see Trump listening to people who actually know what they’re talking about, for once. Wherever we go from here in Afghanistan, this is far better than a commander-in-chief calling the shots on the basis of grossly ill-informed whim.