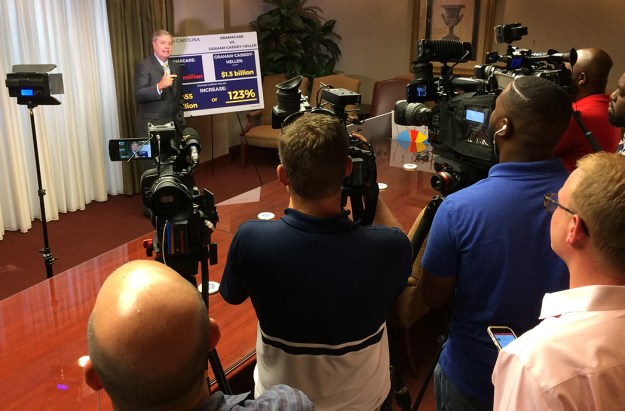 Y’all know I tend to be a fan of Lindsey Graham, but sometimes I just can’t go along.

The healthcare plan he’s touting is one of those times.

Yeah, I appreciate that he’s been dismissive of what other Republicans have been putting up in their desperation to be able to say they “repealed Obamacare.” And I like that he says “federalism” a lot in advocating for it. And that it’s really, really different from anything the GOP leadership in Washington has come up with yet.

But that’s about it.

Basically, he wants to turn it all over to the states: Have the feds give the states block grants, and let the states decide for themselves what kind of system they want. His plan for getting it through an Obamacare-repeal-weary Senate is to enlist governors to help him push it — he says our own Henry McMaster likes it.

There are a couple things about it that bug me. First, the whole idea of having 50 little systems instead of one big one. To my mind, that throws away one of the greatest advantages of having a governmental system — a gigantic national system that includes everybody (which you’d have if you had real mandates with teeth) gives you economies of scale, and the mother of all bargaining positions when it comes to negotiating costs down.

I asked the senator about that at a press availability he had at his Columbia office today. He replied that costs have risen dramatically in the Medicare and Medicaid systems, so my principle doesn’t work.

This was a general availability for working press, so I didn’t do what I would have done in an editorial board meeting: argue with him. I didn’t say, How do you know costs wouldn’t have risen much higher with 50 separate systems? Nor did I say, if there’s any reform that might lower costs or slow increases, wouldn’t it be easier to implement nationally than in 50 different systems?

And I didn’t get into the essential unfairness of forcing Americans to leave their homes and move to another state if their state doesn’t provide the health benefits they need.

Which seems a scenario South Carolinians would likely face. I ask you, what sort of system do you think we’re likely to get in a state that said “no” to Medicaid expansion — to a deal under which the feds would have covered the whole additional cost for the first three years, and 90 percent of it thereafter? How savvy was that? Do you want the same elected leaders who turned that down designing a system?

I may have voted for John Kasich last year (partly because the decision he made to expand Medicaid), and would do so again given the same primary choice, but I wouldn’t want to have to move to Ohio to get decent coverage. Would you?

Some other topics Graham covered at the presser:

12 thoughts on “Graham’s healthcare plan: I’m just not seeing it”