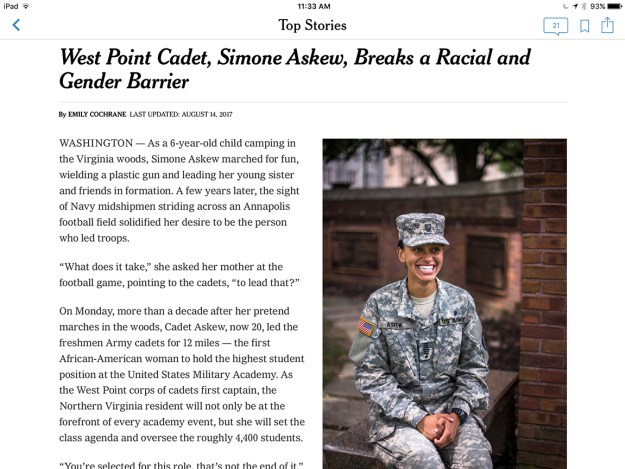 When I saw the above story, and especially the picture with it, I had to smile.

Look at that young woman! She has worked hard, and achieved a milestone toward a lifelong goal. She deserves the joy I see in her face. God bless her. I’d like to meet her and shake her hand, and thank her for her service, and her drive to excel in that service. For the rest of the day, I’d probably feel much better about Life, the Universe and Everything — and especially the human race, which as we know can be disappointing at times.

But when I read stories like this, this tiny, cynical voice tries to ruin it by saying something like “Another ‘first’ story. It’s 2017, and ‘first’ stories still get big play in The New York Times.”

Don’t blame me. On this point, I was warped early on. In high school, I read The Autobiography of Malcolm X. And a lot of things about that book have stuck with me. Here’s one of them…

X tells this colorful sort of comic-opera story about himself that is much like the one Arlo Guthrie tells in “Alice’s Restaurant,” about how he got his draft notice, and upon arrival at the intake station went into an elaborate, over-the-top act to get a psychiatrist to rule him unfit for service.

This was 1943. X acts as crazy as he can while standing in line with the other draftees during the physical, and marvels at how long it takes them to pull him out of the queue. But eventually they do, and when he gets to the shrink’s office, he describes this scene:

Ignore the “not bad to look at” part. This was 1943, and even 20 years later when the book was written, we guys got to say stuff like that without being condemned for it. 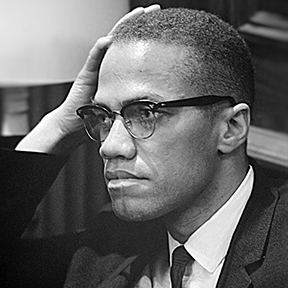 No, my point is what X is saying about “first” stories. Reading this at 17, and rereading it today, I get the strong impression he held such stories in contempt. Part of this arises from the attitudes he would embrace through the Nation of Islam (views he would just be in the process of turning away from as the book was being written). He apparently held all involved in contempt — the white man for so grudgingly allowing black people such small achievements, and black folks for being so thrilled at such crumbs from the white man’s table.

I have never been a bitter cynic in the league of Malcolm X, and hope to God I never will be. I’m pleased for people who accomplish anything that improves their lives and inspires other people. But that anecdote has stuck with me over the years. And every time I see a story like this one today, that memory looms up.

About the time X was working with Alex Haley on that book, the white press joined the “Negro press” in celebrating such firsts. Which in and of itself was a fine thing, a form of progress, of the nation forming a consensus around its highest ideals.

But here it is 2017, and we’re still reading these stories? Almost a decade after the election of our “first black president,” this is still news?

To go back to where I started: I liked reading this story. I like reading about the achievement of a fellow human being named Simone Askew. This world needs more like her! But that part of me that was influenced by that book when I was younger (and far less accomplished) than she is makes me wonder whether it doesn’t take something away from her personal achievement to couch it in terms that Malcolm X scoffed at in 1943…