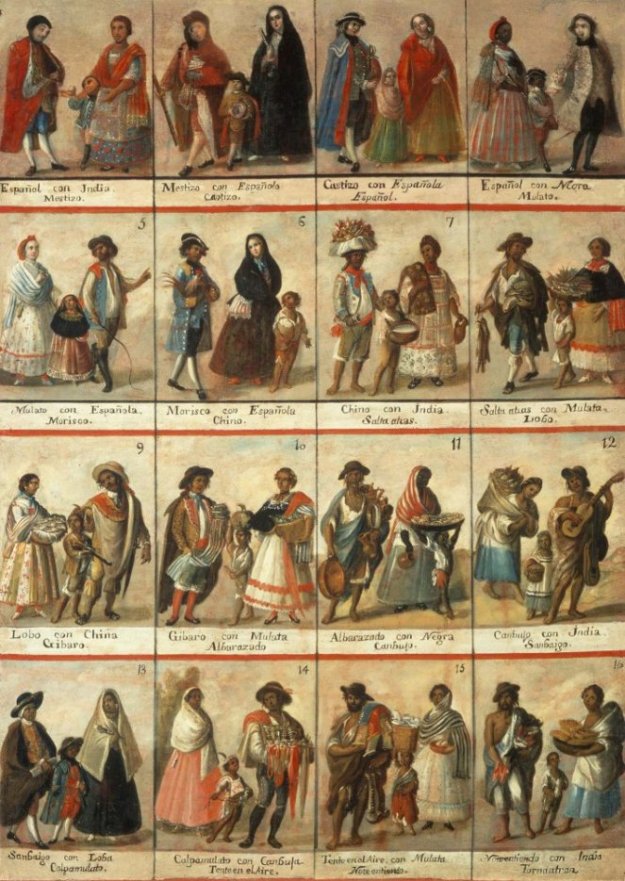 You ever see a Latin American Casta painting? They were used in colonial times to help everyone keep straight in their minds the rigid caste system in the Spanish colonies, based meticulously on various shades of racial heritage.

That would seem to be obvious, wouldn’t it, when we’re speaking of the white supremacists who demonstrated in Charlottesville?

But I mean it more broadly. This comes to mind because of a piece I read in the NYT Saturday, before the violence that led to three deaths.

The column, by Frank Bruni, wasn’t about Charlottesville. At least, he didn’t mention it. It was the sort of piece that steps back from the news and asks where we’re headed. It was headlined “I’m a White Man. Hear Me Out.” As a guy who’s been concerned about the Left’s obsession with Identity Politics for some years now, I was immediately drawn to that headline. And it was a good piece. It began:

I’m a white man, so you should listen to absolutely nothing I say, at least on matters of social justice. I have no standing. No way to relate. My color and gender nullify me, and it gets worse: I grew up in the suburbs. Dad made six figures. We had a backyard pool. From the 10th through 12th grades, I attended private school. So the only proper way for me to check my privilege is to realize that it blinds me to others’ struggles and should gag me during discussions about the right responses to them.

But wait. I’m gay. And I mean gay from a different, darker day. In that pool and at that school, I sometimes quaked inside, fearful of what my future held. Back then — the 1970s — gay stereotypes went unchallenged, gay jokes drew hearty laughter and exponentially more Americans were closeted than out. We conducted our lives in whispers. Then AIDS spread, and we wore scarlet letters as we marched into the public square to plead with President Ronald Reagan for help. Our rallying cry, “silence = death,” defined marginalization as well as any words could.

So where does that leave me? Who does that make me? Oppressor or oppressed? Villain or victim? And does my legitimacy hinge on the answer?

To listen to some of the guardians of purity on the left, yes…

Of course, being a thoughtful sort, he disagrees with that assessment. He goes on to explain why, and pretty persuasively, I think. But then, I didn’t need persuading.

I urge you to read the whole column.

I like his ending, so I will share it and hope the NYT regards it as fair use:

… At the beginning of this column I shared the sorts of personal details that register most strongly with those Americans who tuck each of us into some hierarchy of blessedness and affliction. So you know some important things about me, but not the most important ones: how I responded to the random challenges on my path, who I met along the way, what I learned from them, the degree of curiosity I mustered and the values that I honed as a result.

Those construct my character, and shape my voice, to be embraced or dismissed on its own merits. My gayness no more redeems me than my whiteness disqualifies me. And neither, I hope, defines me.

Bruni seemed to expect to get some criticism for his column. That’s something that all opinion columnists expect. His one beef was his concern that too much of it would be of this variety. Shut up, white man. You have nothing of value to contribute.

He had a cautionary example before him: The reaction to a piece written right after the election by Mark Lilla, described by Wikipedia as “a self-described liberal,” was of just that sort — criticism rooted in his white-manness, not in the quality of his arguments.

That essay in November was somewhat optimistically headlined “The End of Identity Liberalism.” What he is describing is something that has by no means ended. But he suggests that its time as a viable strategy for winning elections is past, if there ever was such a time.

Lilla, like Bruni, made good arguments. (Again, I was part of the choir on this, so maybe reaching me wasn’t a major accomplishment.) It’s a longer piece, in which Lilla introduces his theme this way:

But how should this diversity shape our politics? The standard liberal answer for
nearly a generation now has been that we should become aware of and “celebrate”
our differences. Which is a splendid principle of moral pedagogy — but disastrous as
a foundation for democratic politics in our ideological age. In recent years American
liberalism has slipped into a kind of moral panic about racial, gender and sexual
identity that has distorted liberalism’s message and prevented it from becoming a
unifying force capable of governing.

One of the many lessons of the recent presidential election campaign and its
repugnant outcome is that the age of identity liberalism must be brought to an end.
Hillary Clinton was at her best and most uplifting when she spoke about American
interests in world affairs and how they relate to our understanding of democracy.
But when it came to life at home, she tended on the campaign trail to lose that large
vision and slip into the rhetoric of diversity, calling out explicitly to AfricanAmerican,
Latino, L.G.B.T. and women voters at every stop. This was a strategic
mistake. If you are going to mention groups in America, you had better mention all
of them. If you don’t, those left out will notice and feel excluded. Which, as the data
show, was exactly what happened with the white working class and those with strong religious convictions. Fully two-thirds of white voters without college degrees voted
for Donald Trump, as did over 80 percent of white evangelicals…

And here’s the kind of future toward which Lilla urges liberals:

We need a post-identity liberalism, and it should draw from the past successes
of pre-identity liberalism. Such a liberalism would concentrate on widening its base
by appealing to Americans as Americans and emphasizing the issues that affect a
vast majority of them. It would speak to the nation as a nation of citizens who are in
this together and must help one another. As for narrower issues that are highly
charged symbolically and can drive potential allies away, especially those touching
on sexuality and religion, such a liberalism would work quietly, sensitively and with
a proper sense of scale. (To paraphrase Bernie Sanders, America is sick and tired of
hearing about liberals’ damn bathrooms.)

Teachers committed to such a liberalism would refocus attention on their main
political responsibility in a democracy: to form committed citizens aware of their
system of government and the major forces and events in our history. A post-identity
liberalism would also emphasize that democracy is not only about rights; it also confers duties on its citizens, such as the duties to keep informed and vote. A postidentity
liberal press would begin educating itself about parts of the country that
have been ignored, and about what matters there, especially religion. And it would
take seriously its responsibility to educate Americans about the major forces shaping
world politics, especially their historical dimension…

The liberal, conservative or (oh, consummation devoutly to be wished!) independent who compelling invokes what we have in common as Americans, and builds a vision for our future on it, has my vote.