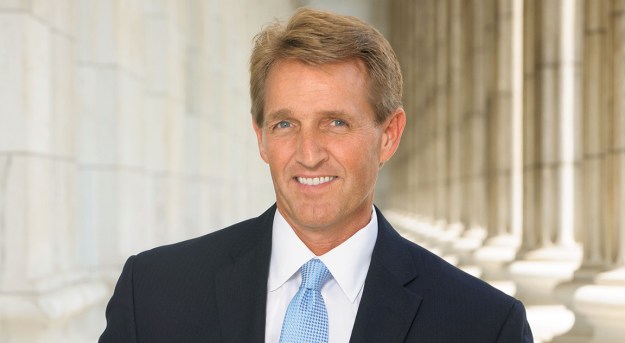 Jeff Flake, the senator from Arizona that you don’t hear so much about, is getting a lot of buzz now for his new book calling out fellow Republicans for failing to stand up to Donald Trump.

Flake likens this action to that of his hero Barry Goldwater acting to keep the John Birch Society out of his conservative movement.

The Washington Post reported on the book this morning at some length. That piece is worth reading. An excerpt:

Just how bad have things gotten in his view? The Republican fears that the term Orwellian “seems quaint now” and “inadequate to our moment.” He muses about the need to devise a new word for the new age “to describe the previously indescribable.”

“Never has a party so quickly or easily abandoned its core principles as my party did in the course of the 2016 campaign,” writes Flake, who has never been known for hyperbole. “And when you suddenly decide that you don’t believe what had recently been your most deeply held beliefs, then you open yourself to believing anything — or maybe nothing at all. Following the lead of a candidate who had a special skill for identifying problems, if not for solving them, we lurched like a tranquilized elephant from a broad consensus on economic philosophy and free trade that had held for generations to an incoherent and often untrue mash of back-of-the-envelope populist slogans.”

As Flake sees it, “We were party to a very big lie.” “Seemingly overnight, we became willing to roll back the ideas on the global economy that have given America the highest standard of living in history,” he writes. “We became willing to jettison the strategic alliances that have spared us global conflict since World War II. … We gave in to powerful nativist impulses that have arisen in the face of fear and insecurity. … We stopped speaking the language of freedom and started speaking the language of power. … Reckless, outrageous and undignified behavior was excused and countenanced as ‘telling it like it is,’ when it was actually just reckless, outrageous and undignified.

“Rather than fighting the populist wave that threatened to engulf us, rather than defending the enduring principles that were consonant with everything that we knew and had believed in, we pretended that the emperor wasn’t naked,” he adds. “Even worse: We checked our critical faculties at the door and pretended that the emperor was making sense. … It is a testament to just how far we fell in 2016 that to resist the fever and to stand up for conservatism seemed a radical act.”…