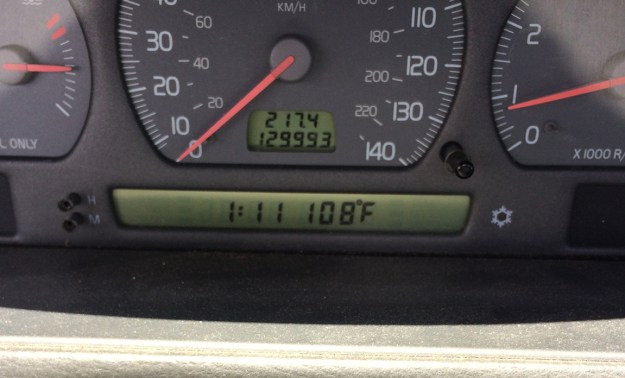 Stop me if I’ve mentioned this before…

These days I drive a 1997 Volvo. It’s a great car, although a bit worse for wear. It was my father-in-law’s car, and my wife inherited it from him. The last few months I’ve been driving it, because our larger, newer Buick is more suitable for my wife to chauffeur the grandchildren in.

I love it, especially in the winter, as it’s the only vehicle among our three with heated seats. I hate having hot, dry air in my face. So I fire up the seat, and let the air I’m breathing stay relatively cool. It’s great.

But, being from Sweden, the car gets seriously traumatized by Columbia summers. For one thing, it has air-conditioning that probably works great in a place where a hot summer’s day is about 75 degrees, but tends to get overwhelmed by our Famously Hot days. But that’s OK; I stay comfortable enough.

I can’t say the same for the car. It freaks out, and the most dramatic manifestation of this is that it starts lying pathologically. On a typical summer day, it pretty much always claims that the temperature is 10 degrees higher than it is. It’s like it’s making excuses: You expect air-conditioning to deal with this kinda heat? Are you nuts?!?

Today, I left it parked with the windows and sunroof open, so it wouldn’t get too hot. I came back to the car, and it was claiming that the temp was 108 degrees!

Again, I love the car, but it is such a whiner…

One thought on “My car is SUCH a crybaby”