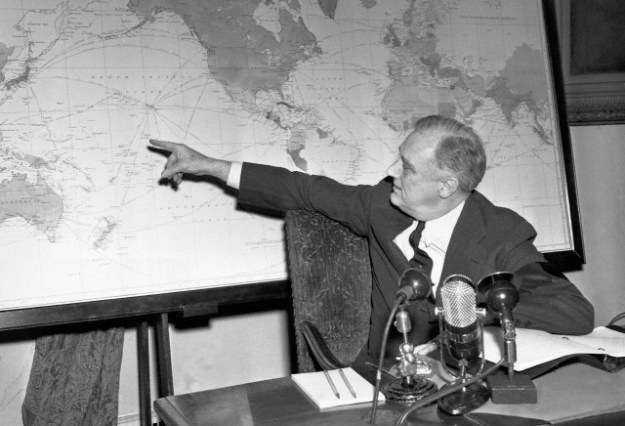 He believed in it, and so do I.

And I answered Phillip at sufficient length that I thought it should be a separate post, so here goes:

Seeing as it’s Phillip and I have the greatest respect for him, I’m not going to send my seconds to confer with his seconds over his having called me a liar. Which is the only way I know to take “a feat of semantic gymnastics designed to make yourself feel more virtuous about your viewpoint.”

I’ll just say: Actually, no. There are no gymnastics involved when you’re saying exactly what you mean, and I’m saying exactly what I mean. As I suggested, there are people who DO think that way — the “superiority over” way. As I also said, people who dislike the phrase “American exceptionalism” — generally post-Vietnam liberals (as opposed to pre-Vietnam liberals, who saw things as I do) — like to paint the rest of us with that same brush, as a way of dismissing our views. As though we were a bunch of Steve Bannons or something.

But that’s not the main point I wish to argue. The larger point is that this assertion is completely wrong: “‘Responsibility’ in this case is self-assigned, that is, the United States arrogates for itself this ‘responsibility’ globally.”

Not at all. Through various security and other diplomatic arrangements, other liberal democracies have looked to the United States for leadership and support in many ways since 1945. This is most obvious through NATO, but through other arrangements as well.

Again, I refer y’all to the start of that Foreign Affairs piece:

In the 1940s, after two world wars and a depression, Western policymakers decided enough was enough. Unless international politics changed in some fundamental way, humanity itself might not survive much longer.

A strain of liberal idealism had been integral to U.S. identity from the American founding onward, but now power could be put behind principle. Woodrow Wilson had fought “to vindicate the principles of peace and justice in the life of the world as against selfish and autocratic power and to set up amongst the really free and self-governed peoples of the world such a concert of purpose and of action as will henceforth ensure the observance of those principles.” Keeping his goals while noting his failures, the next generation tried again with a revised strategy, and this time they succeeded. The result became known as the postwar liberal international order.

The founders of the order embraced cooperation with like-minded powers, rejecting isolationism and casting themselves as player-managers of an ever-expanding team. They bailed out the United Kingdom, liberated France, rehabilitated Germany and Japan, bound themselves to Canada and Mexico, and more. And for seven decades, the allies were fruitful, and multiplied, and waxed exceeding mighty.

Then arose up a new king who knew not Joseph….

And we know who that king is.

But it’s not just about him. If you go back to that thread where this discussion initiated, you’ll see that Doug enthusiastically applauded the comment from Phillip with which I argued. You may not think of those guys as being two peas in a pod, politically. And you certainly wouldn’t identify Phillip with Trump. Well, that brings me to my next point.

A startling array of people coming from many places on the political spectrum simply don’t believe in the postwar consensus that formed under FDR and Truman.

For a generation, that consensus stayed strong and almost unchallenged, with Democrats and Republicans differing mainly over how best to fulfill that role. Then things started breaking up over Vietnam, but the basic assumption that this country had obligations in the world continued, with variations in emphasis, through the Obama administration.

I mentioned Steve Bannon earlier. He, of course, doesn’t believe in our international obligations in part because he believes the U.S. is inherently superior. He’s sort of like those Chinese emperors who, with China positioned at least as well as Portugal and Spain to become a global trading and naval power, suddenly closed their country off to the world, under the theory that China was the center of the universe and superior to all other nations, so why have dealings with them?

Then there are the post-Vietnam liberals to whom I referred, and I hope Phillip doesn’t mind if I put him roughly in that category — I stand ready to be corrected if I’m being presumptuous. I hate to be labeled, so I hesitate to do it to my friends.

Then there are the libertarians like Doug and the Pauls, Ron and Rand. They hate the idea of the United States having a military for anything much beyond patrolling the border with Mexico. (No, wait — that last part took me back to Bannon.)

Then there are the socialists, the Bernie Sanders types, who in opposition to the libertarians WANT a big state, but they only want it to exist to shower blessings on the populace domestically. They get impatient at the very idea of talking foreign affairs. This is in some ways like the post-Vietnam liberals, only much more so.

Then there are the ideological extremists who have taken over the Republican Party, sharing some characteristics with the Bannon types and some with the libertarians. They can’t see over the edges of the narrow boxes they build around themselves, much less see beyond our borders.

There’s no room in any of their views for a United States that would “pay any price, bear any burden, meet any hardship, support any friend, oppose any foe to assure the survival and the success of liberty.”

Anyway, that thing that JFK said there? That’s American exceptionalism.

11 thoughts on “Postwar consensus about U.S. role under fire from all directions”