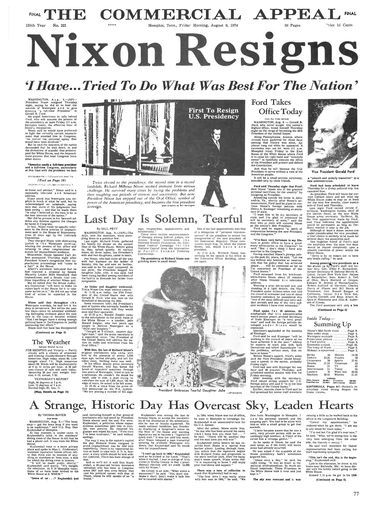 Yeah, I’m a day late with this, but it was some hours-old Tweets I saw this morning that got me to thinking about it:

I remember well. I was a copy boy, bringing the blown-up headline proof to the managing editor: NIXON RESIGNS https://t.co/HeuRp36534

Then, later in the day, I wondered if I could see that front page again, and sure enough, Google delivered — although a small, low-res image. See the page above. (See how much wider newspaper pages were then?)

It was at the very start of my journalism career, when I was still in school. I worked nights at the long-extinct job of copy boy, although in deference to feminist sensibilities it was by that time called “copy clerk.” Basically, I was an errand boy, learning the business. And at that point in time — the waning days of hot type — the function was essential. In a time when everything was physical instead of digital, everything — news stories, pictures, proofs (and the coffee and meals that everyone in the newsroom had the power to send us for) — had to be carried to each stage of the process by hand. And it was a great way to learn the business. I knew some things that senior editors didn’t know about where things were and how they worked together (mostly, where to get the coffee).

And there were obstacles, and workarounds, that would confound anyone who started in the business just a little later. For instance, if you want to make a two-word headline stretch all the way across the page today, you just click and drag and it’s done. But back then a headline wasn’t ones and zeroes; it was a physical thing, set in heavy metal by a machine that could only make it so big. I think the biggest possible was either 72 points (an inch high) or 96.

So here’s what we did: The managing editor wrote “Nixon Resigns” on a scrap of paper and sent me to the composing room (on the next floor up) to get it set into type as big as we could. Then, we took a high-contrast proof (on slick paper instead of the usual cheap newsprint) of that metal-type hed and shot a picture of it on one of the cameras used to make press plates, which used page-sized negative film. Then we blew that image up to full-page width, and made a proof of that, which I then ran back downstairs to the M.E., so he could see how his headline would look.

This was not something you did every day. We were doing it that night because this was history. The editor was being creative.

When I brought the finished product to him, the M.E. looked upon his headline and pronounced it good.

By the way, here was the scene in the newsroom when Nixon was addressing the nation: A bunch of us crowded around the TV over the M.E.’s desk, and watched and listened. I forget the name of our Washington correspondent. Let’s say it was Clark Kent. Someone in the group wondered aloud where Clark was at that moment. Our gruff metro editor, Angus McEachran, snorted, “Watching it on TV, just like us!” There was some laughter.

Those who want to paint the newspaper business as already a fossil, left behind by TV, might point to that 1974 scene as proof.

But here’s the thing: When the show was over, all these people had to jump into action. I’d be running back and forth to the wire machines with the copy out of Washington. Editors would be editing that copy and putting it onto pages. Reporters would be calling Tennessee pols for reactions, and maybe even doing some man-on-the-street.

And the next morning, people would have a huge, in-depth package of stories about what had happened, explaining every detail and what it meant.

So what? you think. But you’re not thinking hard enough. That morning, that would be the ONLY source of reporting and commentary available to that reader. Maybe they saw the speech the night before, but that was over. There was no 24/7 TV coverage, babbling on endlessly. (And no DVR or even VHS so you could have recorded it and watched again. You saw it when you saw it, and that was it.) There was no Web, no social media. Other newspapers were not available to anyone unless they came in the mail a day or two later. The only source they had that morning for all the details and perspective on this historic event was their local newspaper. Other sources — weekly magazines that came in the mail and such — would be available later. But the newspaper was it on that morning, the one source of information about this huge thing that had happened.

So we had an important role to play for our readers, and I felt important playing the bit part I did. I got some extra copies of that headline proof and took them home. I got together with my soon-to-be wife and some friends and showed these proofs off. I felt like a big shot… 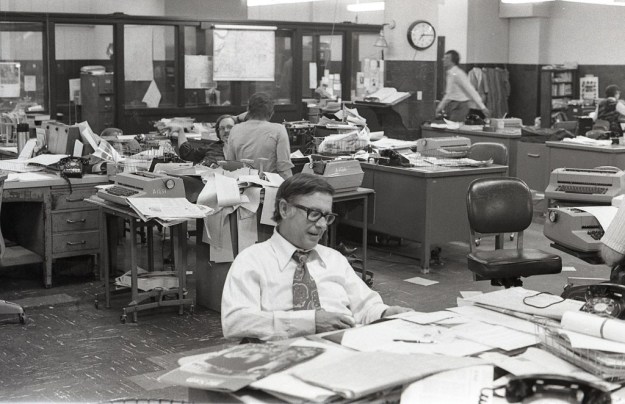 Managing Editor Bill Sorrels, at the desk where he was sitting when I brought him the headline proof.