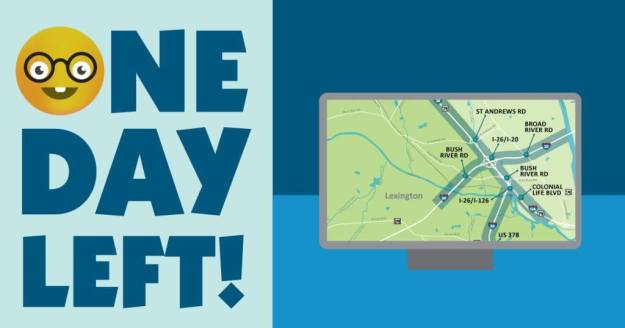 Here’s the notice that was brought to my attention — not by the government, but by my daughter — on the last day of public comment.

So Donald Trump is still president, North Korea just fired a missile over Japan, and Harvey is still ripping up and flooding the Gulf Coast.

So, lots of bad news.

But at least there’s this:

The S.C. Department of Transportation has dropped a plan to build a bypass to unsnarl “Malfunction Junction” that would have caused up to 236 West Columbia homes to be razed.

State Sen. Nikki Setzler, D-Lexington, said he received a letter about the change from the department Tuesday morning.

“This is a tremendous victory for us,” he said. “And this was a community effort.”

The bypass was one of several options being considered by the DOT to alleviate congestion at the junction of I-20, I-26 and I-126. It would have diverted traffic away from the intersection, but the bypass also would have cut through several West Columbia neighborhoods including Quail Hollow and River’s Edge….

I live in Quail Hollow. And while the abandoned route might not have technically gone through my living room, it would have run behind the houses directly across the street from me, and would have blocked me from the only way out of my neighborhood other than swimming across the Saluda River.

It would have been the worst deal possible: My property value would have been destroyed, and I wouldn’t have gotten paid for it because they didn’t necessarily have to buy my house. And my peaceful, semi-sylvan neighborhood — deer sometimes wander onto our lot — would have become utter, roaring chaos, with an interstate directly in front of the house, less than 100 feet away (as near as I could tell from the wholly inadequate maps provided by DOT).

As you’ll recall, I learned about this plan on the last day of public comments last fall, after having received ZERO notification from the state that my neighborhood was potentially to be sacrificed to fix Malfunction Junction, a problem that has never bothered me even though it’s only about a mile from my house.

We found ourselves in a situation that was almost, but not quite, entirely like the one Arthur Dent faced in the first chapter of The Hitchhiker’s Guide to the Galaxy.

Did I ever tell you about the public meeting DOT finally held for my neighbors and me after we DID find out about it on that last day of public comment? Official after official claimed that we should have known sooner — after all, the plans had been on display in the bottom of a locked filing cabinet stuck in a disused lavatory with a sign on the door saying “Beware of the Leopard.” More or less.

Finally, this one woman stood up and faced the truth, and admitted that yeah, they had screwed up big-time by not actually notifying us. Which was nice. I guess she had drawn the short straw on being the “good cop.”

Anyway, I want to thank my Senator, Nikki Setzler, and my representative, Micah Caskey (although Micah says modestly that it was really Nikki) for standing up and raising hell about the deal. I think it probably helped even though the DOT people claimed at the public meeting that resistance would be useless, that political considerations would play no role, that the decision would be made by federal officials entirely on the basis of objective data.

40 thoughts on “Spot of good news: My neighborhood isn’t going to be demolished for a hyperspace bypass”