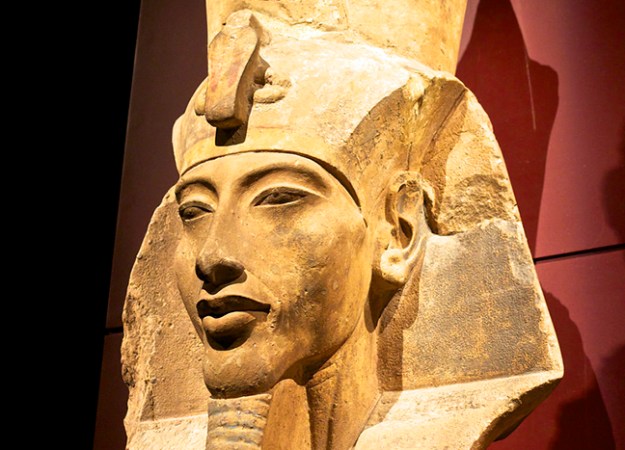 ‘So who’s this Joseph when he’s at home?’

Remember the other day when I quoted, twice (once in a comment, later in a post) the opening of an article from Foreign Affairs? It started out explaining the postwar collective security consensus (which, sadly, has to be explained to people these days), and ended with this transition:

Then arose up a new king who knew not Joseph….

… which I thought was an awesome line, because that’s exactly where we are, isn’t it? We have a king who knows not anything. Not history, not policy, not diplomacy, not the basics of governing, not the Constitution, not the rule of law. One who is surprised to learn of Frederick Douglass. A man who, for all I know, may not even know enough about Scripture to get the Joseph reference.

Yesterday, I happened to attend Mass at a local Episcopal Church — one that I visit from time to time. I always enjoy the services there for several reasons. One is that I can hear what’s going on. Whether the homily is in Spanish or English, the acoustics make it hard for me to follow the homily at my church, St. Peter’s. (It was hard before I lost hearing in one ear to Ménière’s; it’s next to impossible now.)

I also really like that they use the old liturgy — or what I think of as the old liturgy, which was really post-Vatican II liturgy, but I became Catholic long after Vatican II. Anyway, the Episcopalians are still using the one I like, in which we say “and also with you,” instead of “and with your spirit,” and in which the Creed starts with “We believe” instead of “I believe.”

Now a new king arose over Egypt, who did not know Joseph. He said to his people, “Look, the Israelite people are more numerous and more powerful than we. Come, let us deal shrewdly with them, or they will increase and, in the event of war, join our enemies and fight against us and escape from the land.” Therefore they set taskmasters over them to oppress them with forced labor. They built supply cities, Pithom and Rameses, for Pharaoh. But the more they were oppressed, the more they multiplied and spread, so that the Egyptians came to dread the Israelites….

Which was quite a coincidence, I thought.

But I didn’t realize how much of a coincidence it was until this morning.

I was thinking about it, and decided to go back and read it, so I went to the U.S. Conference Conference of Catholic Bishops site to check out yesterday’s first reading.

But it was a different reading. It was this one, from Isaiah.

Huh. So, if I had not just happened to attend a church other than my own, I would not have heard that reading, and would not have been struck by the coincidence.

It appears that God wants me to pay more attention to that line.

So I’m pondering it this morning…

Or… did He want me to have occasion to go back and read the Catholic reading, which I otherwise would have missed? It, too, seems freighted with timely meaning:

Thus says the LORD to Shebna, master of the palace:
“I will thrust you from your office
and pull you down from your station.
On that day I will summon my servant
Eliakim, son of Hilkiah;
I will clothe him with your robe,
and gird him with your sash,
and give over to him your authority.
He shall be a father to the inhabitants of Jerusalem,
and to the house of Judah.
I will place the key of the House of David on Eliakim’s shoulder;
when he opens, no one shall shut
when he shuts, no one shall open.
I will fix him like a peg in a sure spot,
to be a place of honor for his family.”

So… did Shebna not know Joseph, either?

Apparently, I should read further, and reflect…

One thought on “Then arose up a new king who knew not Joseph….”