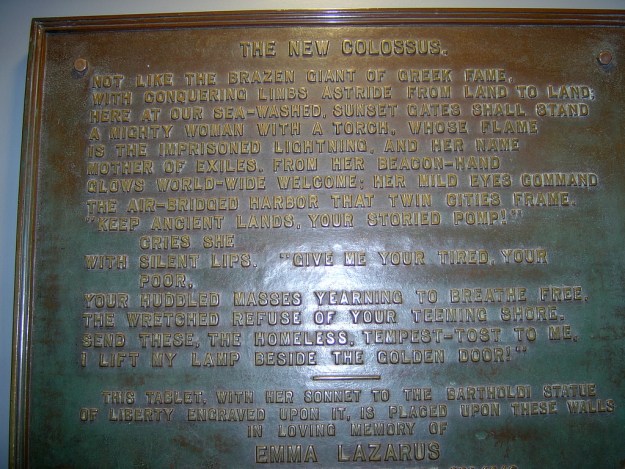 The inscription on the Statue of Liberty. But Stephen Miller reminds us the inscription was added LATER. So, you know, I guess it doesn’t count…

You know how the conversation goes with some of our friends who get all worked up about immigrants among us. You call them nativists, and they come back with, “I just object to the fact that they’re illegal!”

WASHINGTON — President Trump embraced a proposal on Wednesday to slash legal immigration to the United States in half within a decade by sharply curtailing the ability of American citizens and legal residents to bring family members into the country.

The plan would enact the most far-reaching changes to the system of legal immigration in decades and represents the president’s latest effort to stem the flow of newcomers to the United States. Since taking office, he has barred many visitors from select Muslim-majority countries, limited the influx of refugees, increased immigration arrests and pressed to build a wall along the southern border.

In asking Congress to curb legal immigration, Mr. Trump intensified a debate about national identity, economic growth, worker fairness and American values that animated his campaign last year. Critics said the proposal would undercut the fundamental vision of the United States as a haven for the poor and huddled masses, while the president and his allies said the country had taken in too many low-skilled immigrants for too long to the detriment of American workers….

Well, the advocates for this don’t have “illegal” to hide behind.

They’ll find other excuses, of course. I heard a guy on the radio this morning rattling off numbers of all the people in this country who’ve given up on finding work (and don’t show up in numbers showing we’re pretty much at full employment), implying that these folks might re-enter the workforce once immigrants aren’t taking the jobs and driving down wages. He’d done his homework. But then another guy came on and kind of took those numbers apart.

Here, by the way, is what our senior senator had to say:

But Senator Lindsey Graham, Republican of South Carolina, noted that agriculture and tourism were his state’s top two industries. “If this proposal were to become law, it would be devastating to our state’s economy, which relies on this immigrant work force,” he said. “Hotels, restaurants, golf courses and farmers,” he added, “will tell you this proposal to cut legal immigration in half would put their business in peril.”

What Graham was voicing there is the traditional conservative, pro-business view — what was once the standard Republican approach. I can still remember when much of the objection to immigration, legal or illegal, came from the pro-union left. But that equation sort of changed over the years.

The interesting thing is, a key argument being used for keeping these furriners out is an old pro-labor one: These people take jobs from, and lower wages for, American workers. But then, nativists have always said that, too.

Anyway, I suppose this new wrinkle will help separate the folks who are really, truly, just opposed to illegal immigration from those who just don’t want more foreigners here, period.

13 thoughts on “This time, nativists can’t hide behind the word, ‘illegal’”