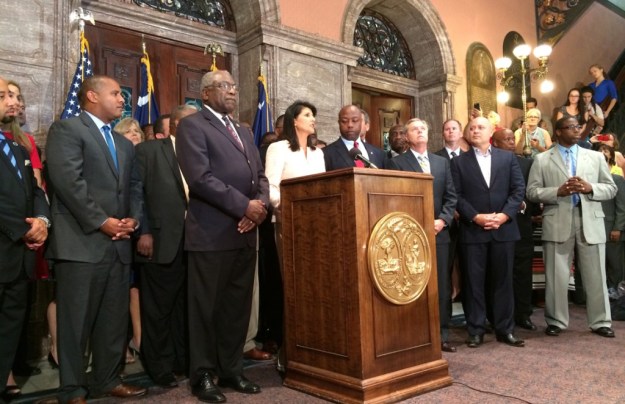 A moment in our history that makes ME proud: Leaders stand with Nikki Haley as she calls for the flag to come down.

Or rather, for not doing one horrible thing. It would have been truly horrible to, like Sheri Few, play to the Trumpian faction in her party by denouncing the removal of the Confederate battle flag from the State House grounds.

But she didn’t do that. So, kudos there, as far as it goes.

But then she felt compelled to qualify that by saying, “I am proud of the Confederacy.” She elaborated on the point:

But I am South Carolina born and raised, and I am proud of our history. We are standing on the shoulders of giants, and I don’t apologize for that….

I am proud to be from South Carolina. I am proud of the Confederacy…. 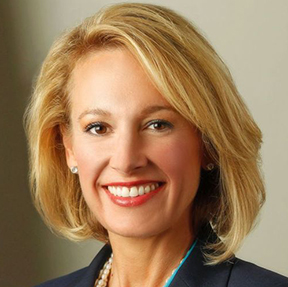 I want to know because being proud of the Confederacy — an insurrection against the United States, based in the rebelling states’ wish to continue the institution of slavery (and they were quite specific about that, whatever neoConfederate revisionists may say) — and being proud of South Carolina are not the same thing. What is it about the Confederacy, as opposed to South Carolina, that gives her a warm feeling? Is it just that she has an affinity for, say, a slower, more traditional, politer, more agrarian way of life than the mercantilist, impatient, abrupt way that Yankees chose to live in their big cities?

Is she proud at how many victories the Confederacy won on the battlefield before Gettysburg and Grant turned the tide — is it a purely martial pride in the fighting ability of Southern manhood? If so, how does one separate that pride from the cause? (And don’t try to distract me by pointing out that many individual soldiers owned no slaves and thought they were protecting their homes from “Northern aggression.” When I say “the cause” in speaking of the “Confederacy,” I mean the reason the Confederacy came into being, the frank reason for secession.)

And once you say you’re proud not only of South Carolina but of the Confederacy — the low point in the South Carolina story — it causes me to wonder what else it is about “our history” that makes you proud. Are you proud of the role South Carolina played in the Revolution? Are you proud of John Laurens, the Founder from SC who was a courageous critic of slavery? Do you take pride in the wit of James L. Petigru, who of secession said “South Carolina is too small for a republic and too large for an insane asylum”? Does your pride turn to science? Does your chest swell at Charles H. Townes invention of the laser? If so, I share your pride.

On the other hand, are you proud of Ben Tillman, Cole Blease and Cotton Ed Smith? I am not.

Here’s a Rorschach test for you: Are you proud of Strom Thurmond? And if so, which version: The Dixiecrat who famously filibustered civil rights? Or Ol’ Strom who later devoted himself to constituent service regardless of the color of the constituent?

Are you proud of his son Paul, who so eloquently explained why the flag had to come down?

For my part, I’m deeply proud of my state and its leadership for taking down the flag, and for the reasons and way they did it. Is Catherine Templeton? Or does she merely not want to “second-guess” them for “what the people in the Statehouse did when I wasn’t there?” Because to me, she really seemed to be damning them with faint praise.

43 thoughts on “What do you MEAN, ‘I am proud of the Confederacy?’”