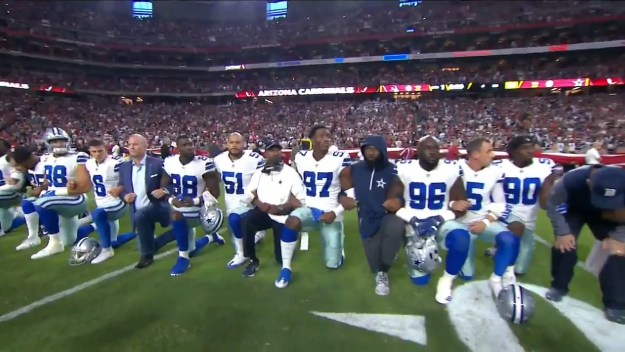 As reluctant as I am to write about anything that happens on football fields, here goes…

Obviously, we have a different situation than we did when Colin Kaepernick first refused to stand during the national anthem.

Actually, to be technical, we had a different situation when Kaepernick switched from sitting to kneeling, way back when he still had a job. Obviously, kneeling is by definition less disrespectful.

And of course now, it’s no longer about the anthem or the flag, but about Donald Trump making a fool of himself yet again, as he is wont to do. Which is why serious essays on the subject have headlines such as “What Will Taking the Knee Mean Now?”

My problem with Kaepernick’s original action — the sitting — was first, that it was so upsetting to my friend Jack Van Loan. Secondarily, it arose from the problem I tend to have with nonverbal forms of protest. My attitude is, if you have a problem with something, use your words.

Words allow us to be very precise about what upsets us and why it does. They allow us to clearly advocate remedies for the problems to which we object.

But what does refusing to stand for the flag, or the National Anthem, say? Since the flag, and the anthem, represent the entire nation, it means your beef is with everything about the country. Your protest is entirely lacking in specificity. You’re saying you’re objecting to the entire country because some white cops committed acts of violence against some black citizens — or whatever legitimate locus of concern you started with.

You’re saying the whole country is as bad as the North Charleston cop who shot Walter Scott. Every bit of it, starting with the Founders and the Declaration of Independence and the Constitution. You’re dissing Abraham Lincoln and Frederick Douglass along with Robert E. Lee (despite the fact Douglass has been doing such a terrific job lately). You’re lumping in Martin Luther King with George Wallace. They’re all part of America, so you blame them all.

This is not helpful, to your cause or to anything else.

You have a complaint — express it clearly and specifically. Use your words — preferably, quire a few more of them than you could fit on a bumper sticker.

Words aren’t perfect — I can certainly testify to that. Someone will always misunderstand. If you write “up,” you will surely be loudly castigated for saying “down.” But at least with words, there’s a chance of clear communication, and perhaps even agreement– perhaps even changing someone’s mind! (See what a Pollyanna I am?)

Anyway, all that is sort of beside the point now, since obviously the kneeling of the last few days has been about Donald J. Trump. He saw to that. He has managed to focus something that previous lacked focus.

Now, it’s about whether people have the right to kneel — and obviously, they do — and whether the president of the United States is empowered to order them not to. Which, of course, he isn’t.

He’s not too good with words himself, but Trump certainly has a talent for clarifying things…

43 thoughts on “About this kneeling thing…”