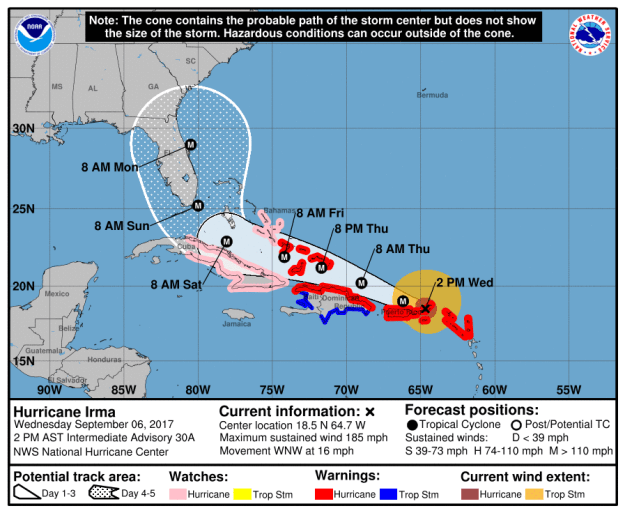 That headline may seem jarring, given that our governor has just pre-emptively declared a state of emergency in anticipation of a storm that may or may not make landfall in South Carolina days from now.

But last night, the Category 5 hurricane passed north of the island of Dominica, where my daughter lives and works for the Peace Corps.

She and other Peace Corps personnel went through several days of uncertain waiting to find out whether they’d be evacuated to another island. Then, with the path reducing the threat to Dominica to tropical-storm level, they were simply gathered together in a hotel and stayed on the island.

The weather is fine now, she reports, but Peace Corps officials are having them stay where they are another night, until it’s certain that roads are clear.

Quite right, too. I’m all for caution.

As for the threat to SC, well, I’m concerned, of course. And the effects could be terrible, as we saw last week in Texas. But we live on a biggish landmass, and at the moment I’m less worried than I was the last couple of days…

2 thoughts on “Breathing a sigh of relief over Hurricane Irma”