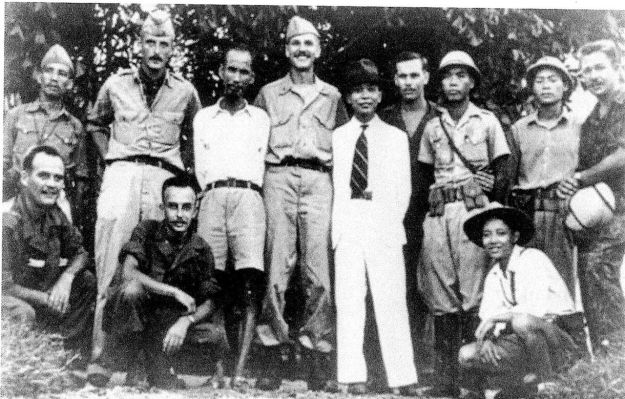 Ho Chi Minh, third from left, stands with Americans of the OSS in 1945. Not sure, but I think that’s Dewey to his left.

The first American military death at the hands of Vietnamese communists was possibly the most tragic, because it helped lead to all the others.

Lt. Col. Peter Dewey, only 28 years old (which makes his rank rather startling), was our man in Saigon at the end of World War II. As the various powers who had just won the war were figuring out their relationships in Southeast Asia, Dewey — the head of our OSS team in Vietnam, was leaning toward supporting Ho Chi Minh’s Viet Minh.

This made some sense, as Ho at the time still had pro-American leanings, despite his devotion to Leninism.

But the senior Allied officer in country was British Maj. Gen. Douglas D. Gracey — a colonialist who was all for helping the French reassert control over their colony. Gracey ended up sending Dewey home. On the way to the airport, Dewey refused to stop at a roadblock, yelled at the Viet Minh sentries in French, and was shot and killed by them.

From then on, Western powers increasingly sided with their French allies, and things got worse and worse…

That’s one thing I learned from the first episode of Ken Burns’ latest opus, “The Vietnam War.”

On the whole it was very helpful and educational. I only have one beef:

The episode told a clear, coherent story that set the stage, starting with the beginning of French rule in the 1850s and running up to 1961. As long as it stuck to that, it was solid. But the filmmakers kept cutting away to little snippets foreshadowing our involvement at its height in the late ’60s. We’d be learning what happened in the1940s, and suddenly someone would be talking about his experience as a marine in 1969.

It was jarring and distracting, and, I felt, rather condescending. It was as though Burns and Lynn Novick were saying, “We don’t think you have the attention span to stick with this narrative, so we’ll give you little bits of what you tuned in to see…”

I didn’t like that a bit. But on the whole, a solid start…

15 thoughts on “First episode of Ken Burns’ ‘The Vietnam War’”