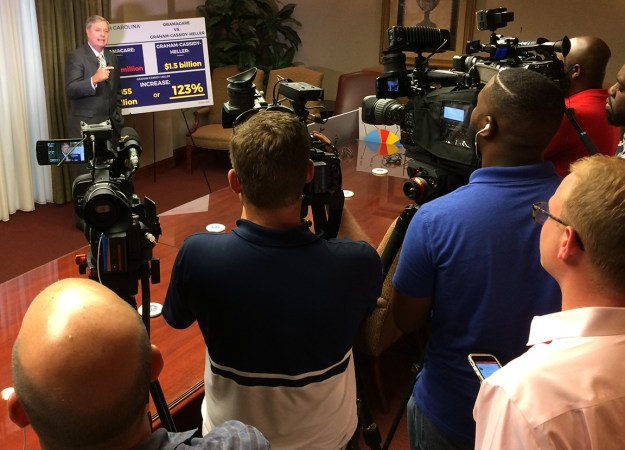 Today, with it getting so much more attention, I share with you this view of it, headlined “New Trumpcare Deserves a Quick Death.” An excerpt:

On Wednesday, a group of Republican senators plan to release a bill to repeal the Affordable Care Act. It comes from Bill Cassidy of Louisiana and Lindsey Graham of South Carolina, and they will market it as a bill that gives states the flexibility to create the system that they want.

But that’s deeply misleading. While it would theoretically give states more flexibility, the bill would mostly rob states of money to pay for health insurance — and millions of Americans would lose coverage as a result. Think of it this way: Every reader of this newsletter has the theoretical flexibility to buy a private jet.

Cassidy-Graham, as the bill is known, ends up looking remarkably similar to previous repeal attempts. It would likely result in 15 million Americans losing their insurance next year and more than 30 million losing it a decade from now (based on analyses of an early version of the bill, which was similar to previous Republican health bills). “The similarities are more striking than the differences,” Aviva AronDine of the Center on Budget and Policy Priorities told me.

The same column hints at a far better way for our senior senator to direct his energies:

There is also good reason to hope that Cassidy-Graham dies quickly. Members of both parties — like Lamar Alexander, the Tennessee Republican — now seem open to a bipartisan bill to fix some of Obamacare’s problems. A Senate committee held a hearing on the subject yesterday. But it was clear at the hearing that Republicans have a hard time talking publicly about bipartisan compromise so long as the fantasy of a beneficial repeal bill remains alive….

Indeed. Y’all know I’m a Lindsey Graham fan (most of the time), but I was a Lamar Alexander fan long before that. And this time, Lamar is clearly in the right of it. And what Graham is doing is actually an impediment to wise policy.

It amazes me that anyone from South Carolina could think that turning it all over to the states could be a good idea, given that our solons utterly refused a Medicaid expansion underwritten by the Feds simply because it was associated with “Obamacare.”

Lindsey should drop his bad idea like a hot potato and get behind Alexander’s effort. Or better yet, support Bernie Sanders’ single-payer approach. But somehow I’m thinking the Alexander option would be less of a strain for him.

It’s time to get past this “Repeal Obamacare” mania that afflicts Republicans, and get on to serious matters of governance…