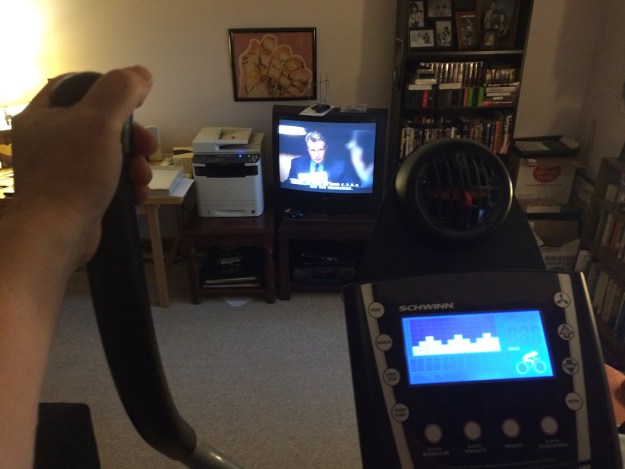 The view from my elliptical trainer, in my home office (yeah, that’s “The West Wing” on the tube).

Like so many, this particular mania started with an iPhone app.

Or maybe I can blame Doug Ross. After all, he had been bragging to me about his 10,000 steps  a day — which sounded extreme to me — just a day before this happened.

Or maybe it was the app.

Anyway, I was having lunch with some folks from ADCO, and a couple of the women were wearing Fitbits, or something like that. To make conversation, I asked if they had apps on their phones that tracked their data. Then a little light went off in my head. I remembered that awhile back I had started to use this Health app that I think came with my phone — I went in and entered some basic stats and such — but then had lost interest and forgotten about it.

Curious, I called it up, and to my surprise saw that it had been counting every step I took, every day, for two years!

I also saw that, thanks in part to my morning workouts on the elliptical trainer, I was frequently doing six or seven thousand steps a day without knowing it. And I’d exceeded 10,000 a couple of days when I was at the beach earlier this summer.

So the next day (Aug. 31), I started actually trying — I added some time to the morning elliptical workout (I’m up to 35 minutes now), and started taking a walk around the neighborhood with my wife in the evening. And if that’s not enough (it usually is), a very few more minutes on the elliptical does the trick. 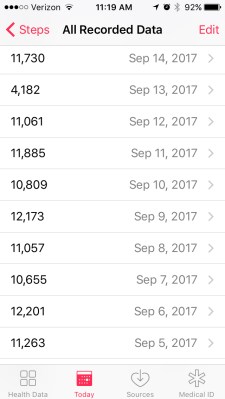 (Oh, and I hope it won’t offend Doug and Bud too much, but I do take a day of rest once a week. Usually, it will probably be Sunday. But this week, as you can see from the stats at right, it was Wednesday. That’s because I gave two units of platelets Tuesday evening at the Red Cross — I went for a long walk downtown on Tuesday at lunchtime to get in my full 10,000 without the evening walk — and that always takes something out of me more than just platelets. I need the next day to recover my energy.)

Also, yesterday morning my weight was down to 172.2 — better than it’s been in… a while. (When I started the morning workouts a couple of months back, I was usually well over 180, sometimes more than 185.)

And I feel pretty good about it. And it’s weird how motivating it is to watch those steps mount up on the app. Silly, but it works. I let nothing stop me, so far. Last night, my wife didn’t feel like walking, so I did another 35 minutes on the elliptical — 70 minutes for the day — bringing my total to 11,730. I’m a machine!

Anyway, I’m telling you all this in order to put pressure on myself to keep going. Sorry to use you that way, but it’s for my health, you see… 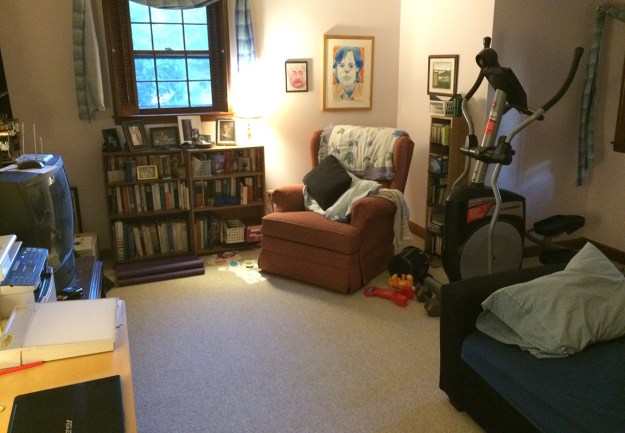 My home office, where the elliptical magic happens.