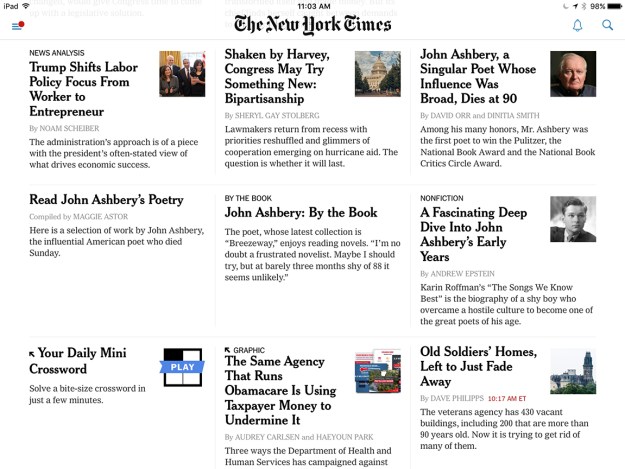 The other day, I showed a screenshot from my NYT app in which everything visible on the page was about Hurricane Harvey. Well, that’s not the only thing the paper covers thoroughly.

A couple of days back, poet John Ashbery died, and the Times went pretty big with it — as you see, four separate headlines.

And this made me feel dumb, and out of it.

It got me to thinking: Aside from that anthology of Yeats (which I’ve had since college) that sits on a shelf in our upstairs bathroom, which I may glance at once or twice a year, when do I ever read poetry any more at all? (And let’s be really honest here: When I do pick up the Yeats book, I don’t read anything new — I turn either to “The Second Coming” or “An Irish Airman Foresees His Death.”)

Can I even name a living poet? I mean, I sort of think of Elvis Costello as a poet, and some people might cite rappers, but here I’m using a more restrictive definition: Can I name any living people who just write verse without being known for anything else, full-time poets like Yeats and Keats and Coleridge and e.e. cummings, or, I don’t know, Edwin Arlington Robinson (who I had to look up to add to the list, even though I do remember one of his poems)?

No, I cannot. As much as I was immersed in such in school, it’s like poetry was a thing that ceased to exist after graduation, as much a thing of the past as knights in armor. And I’m a guy who’s always made his living with words! If there’s a latter-day belle dame sans merci, or a goat-footed balloon man still out there whistling far and wee, I am unaware of it.

Apparently, this John Ashbery was a major deal. He won every poetry prize there was, and lived to be 90 without my being aware of him.

Were any of y’all as ignorant as I?

Here’s one of his poems:

BY JOHN ASHBERY
The room I entered was a dream of this room.
Surely all those feet on the sofa were mine.
The oval portrait
of a dog was me at an early age.
Something shimmers, something is hushed up.
We had macaroni for lunch every day
except Sunday, when a small quail was induced
to be served to us. Why do I tell you these things?
You are not even here.

So now you can say you read some poetry today. How often can you say that?

4 thoughts on “John Ashbery: He was a poet, and I didn’t know it”