You know how Facebook is always putting events on your calendar, whether you want it to or not? Well, it does that to me.

Anyway, for once it put something on there that I was interested in attending — or perhaps I should just say, “checking out.”

It was a “Vigil for DACA and Immigrant Dreamers,” described on Facebook this way:

Because DACA is at risk, join us Tuesday at 6pm in front of the State House to show our support for DACA youth and to pray for moral strength and guidance of our political leaders to come together and pass the bi-partisan DREAM Act. The DREAM Act would provide safety and security through a pathway to citizenship for these aspiring citizens.

As this is a vigil, we hope that the nonviolent intent of this action is clear. Everyone participating in this Event will be required to abide by all applicable laws and lawful orders of authorities. This Event will be nonviolent and will not involve any civil disobedience or other violation of law.

And that’s pretty much the way it was.

It was a modest, but respectable-sized, crowd. Very low-key while I was there. Kind of a usual-suspects crowd — nothing that would cause the GOP pols who run our state to say, “Golly, my constituents are up in arms! I’d better take a stand against Trump.” But everyone meant well, as it seemed to me.

And that’s all I have to say about that…

Alan Wilson did drop the threat of joining in the challenge to DACA. But he didn’t do it because of these folks and their vigil. He did it because good ol’ Donald Trump made it unnecessary: 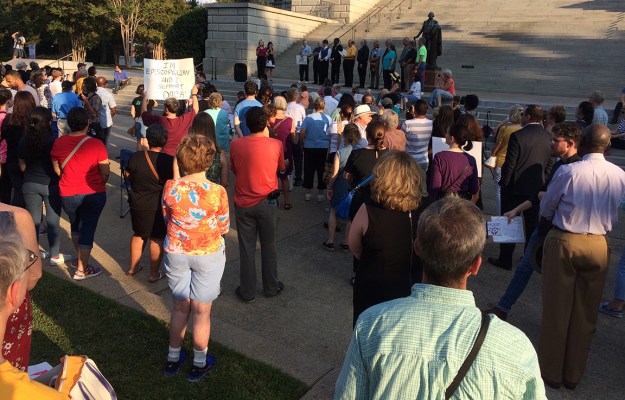