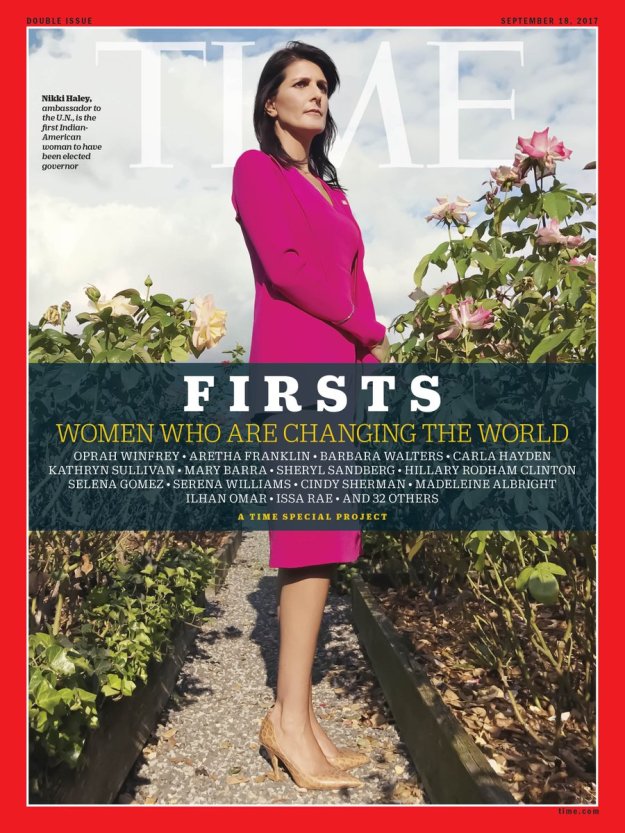 Are you ready for this, folks?

To which I could only react by saying, it’s astounding how far a person can get just with poise and social graces. But let’s give Nikki some credit for having some assets: What’s even more amazing than that is how far someone can now get without those things — as proof of that, we have her boss.

Nikki looks good, very good, standing next to the administration that she serves in. It doesn’t mean she’s ready to be secretary of state by any stretch of the imagination. Then again, I’m not convinced that Rex Tillerson was, either. While he may know a good bit more about the world than our ex-governor, he does lack those social skills — and astonishing self-confidence — that our Nikki possesses in abundance. And while I’d like to see some actual foreign policy credentials, at least those qualities are assets in diplomacy.

Did you see that list of women? Could they not come up with a more, um, current list? The headline is WOMEN WHO ARE CHANGING THE WORLD — “are,” not “were,” or “did decades ago.”

And yet we have… Barbara Walters, who made a splash back in what, the ’70s? Aretha Franklin, who is certainly awesome, but had her heyday even earlier? Hillary Clinton — the splash that didn’t happen. And I’m a Madeleine Albright fan, but what has she done since the ’90s?

Perhaps the magazine will tell us. But given the shallowness of the few things I’ve read in TIME in the last 20 years, I don’t have my hopes up.

What about — I don’t know — Angela Merkel? Or Theresa May, despite her recent troubles? Or somebody current.

At least Nikki is busily storming the foreign policy establishment right now. But that’s not, apparently, TIME‘s reason for putting her on the list. Instead, they’re still celebrating her for being “First Indian-American woman to be elected governor.” Really — it happened in 2010, and they’ve just caught on to it! At least Newsweek did it when it was news. In fact, they kind of jumped the gun on it.

I mean, come on! I haven’t exactly been a cheerleader (except on her greatest moment, getting the flag down), but the woman’s done more that that! Show some respect — if not to her, then to us as readers!

I dunno. There are magazines out there that are more engaged and relevant than they’ve ever been. I’d put The New Yorker in that category. But TIME, the first magazine I ever subscribed to (when I was in high school), seems to have given up on offering us anything worth our time.

You want to read something that matters about Nikki Haley? Go to that Foreign Policy piece Phillip brought up, where you’ll read:

Haley’s high profile on pressing international issues, including Iran and North Korea, raised fresh questions about the influence and political future of the secretary of state. Tillerson has been strangely absent from the public spotlight, even amid mounting tensions with North Korea, and Haley has stepped in to fill the void….

3 thoughts on “Nikki Haley on the cover of TIME”