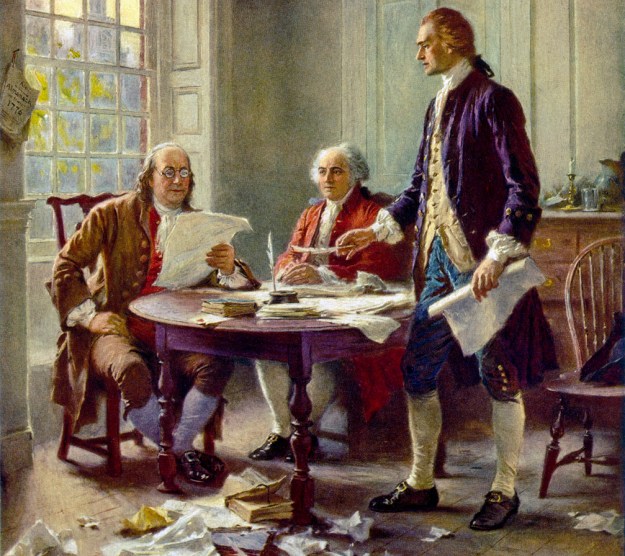 Writing the Declaration: One thing that I think ‘defines us’ more than, say, arguments over sex.

Since I started reading The New York Times again on a daily basis (because they offered a better deal than The Wall Street Journal), I’ve been enjoying Ross Douthat‘s columns.

But I really have a beef with the lede (although not the overall thrust) of his piece today:

The secret of culture war is that it is often a good and necessary thing. People don’t
like culture wars when they’re on the losing side, and while they’re losing they often
complain about how cultural concerns are distractions from the “real” issues, usually
meaning something to do with the deficit or education or where to peg the Medicare
growth rate or which terrorist haven the United States should be bombing next.

But in the sweep of American history, it’s the battles over cultural norms and socalled
social issues — over race and religion, intoxicants and sex, speech and
censorship, immigration and assimilation — that for better or worse have often made
us who we are.

First I’ll deal with the second graf. With the possible exception of race, I don’t think that litany of social issues “made us who we are.” Take immigration, for instance. We can’t speak of what current battles over the subject have meant to the country, because the fighting is still going on. But we can look at battles that are over — such as the waves of nativism and anti-Catholicism that greeted the Irish and Italians who came here in the 19th and early-20th centuries.

Aside from revealing an ugly side to our national character that has once more come to the fore, I don’t think those battles over long-ago immigrants settled anything. Despite the opposition, those particular immigrants kept coming, and eventually (after two or three generations) were mostly accepted as fellow Americans.

Of course, those were European immigrants. The conversation gets more complicated when we’re talking about nonwhites. But what part of that defines us? Is it the shameful, racist Immigration Act of 1924, or the Immigration and Nationality Act of 1965, which undid the 1924 legislation?

Or is it the wave of nativism that elected Donald Trump president? And how have we been defined? And how has that battle been constructive?

Personally, I’d say we were defined by the Declaration of Independence, the Constitution — particularly the Bill of Rights — the Civil War, the 13th Amendment, the results of the Second World War and the Cold War.

That’s my beef with the second paragraph. But my real problem is with the first. To repeat:

People don’t like culture wars when they’re on the losing side, and while they’re losing they often complain about how cultural concerns are distractions from the “real” issues, usually
meaning something to do with the deficit or education or where to peg the Medicare
growth rate or which terrorist haven the United States should be bombing next….

Another way to put that is, issues on which we have a realistic chance of coming together and accomplishing something constructive for the country.

I find it easiest to explain this in terms of my experience on the editorial board. I had little interest in leading my team to address, say, abortion. Not that I didn’t regard such issues as significant — y’all know how strong my attitudes are on abortion. I just didn’t see an opportunity to do any good wading into those issues.

First, my fellow board members were all over the place on such issues. We would have to waste a lot of time internally arguing about such things and getting nowhere, except maybe for increasing acrimony on the team and damaging our ability to work together on other issues.

But far more importantly than that, I saw no possibility of anything we said on those subjects — even if we were able to agree — having a positive effect on the larger world. For pretty much all of my time on the editorial board, partisans brought up those issues for one purpose — to separate the sheep from the lambs. They were litmus tests to see which side you were on, ways of stirring up the base to give money in order to fund the battle against those other people who disagreed.

Over and over again, such issues have been used to push the American people apart, and keep them from agreeing on anything.

But I did see the possibility of saying something constructive, something that might contribute to a useful conversation, about our unworkable form of government in South Carolina, or whether to defund public schools through vouchers, or how to pay for needed road repairs, or other practical issues in the public sphere.

Now, someone is going to say, “Then why did you write so much about the Confederate flag?” Because in South Carolina, that was a significant issue that did define us. As long as it flew, we knew why it flew: So the majority (or rather the more extreme elements of the majority, the people GOP lawmakers live in fear of) could say to the minority, “We are the ones in control here, and the rest of you can go to hell.” A state that would pass its laws in a building with a statement like that flying on its lawn could not be expected to legislate in behalf of all its citizens. It was something we had to grow up, deal with and put behind us if we were to have any hope to move forward as a people.

It was something we needed to get out of the way so we could deal with other issues.

Anyway, the rest of Douthat’s column, in which he decried the kinds of culture wars that attract Trump’s attention, was fine…