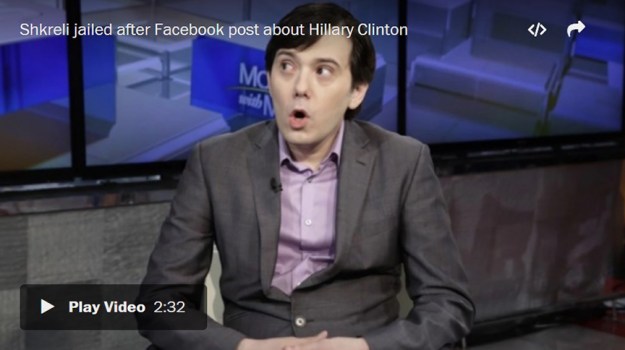 What a weird world we are living in.

You probably saw this last night:

NEW YORK — A federal judge on Wednesday revoked the $5 million bail of Martin Shkreli, the infamous former hedge fund manager convicted of defrauding investors, after prosecutors complained that his out-of-court antics posed a danger to the community.

While awaiting sentencing, Shkreli has harassed women online, prosecutors argued, and even offered his Facebook followers $5,000 to grab a strand of Hillary Clinton’s hair during her book tour. Shkreli, who faces up to 20 years in prison for securities fraud, apologized in writing, saying that he did not expect anyone to take his online comments seriously, and his attorneys pleaded with the judge Wednesday to give him another chance.

“The fact that he continues to remain unaware of the inappropriateness of his actions or words demonstrates to me that he may be creating ongoing risk to the community,” said U.S. District Judge Kiyo Matsumoto, in revoking his bond.

“This is a solicitation of assault. That is not protected by the First Amendment.”…

And… I think the judge is right, as weird as it is to think of saying “pull Hillary Clinton’s hair” being on a par with yelling “Fire!” in a crowded theater. (If he’d just said, “I’d like to pull her hair,” that would be one thing. But offering to pay people to do it?)

But everything about this situation is weird. And weird in ways that are fairly unique to the times in which we live.

The strangeness starts with Shkreli himself. His own attorneys defended him with the argument that Hey, he’s a weird guy. He can’t help it. He’s always been this way.

But in the past, did people described as being as “strange” as “Rain Man” rise to make millions in business? Yeah, maybe they did — but their weirdness was easier to hide.

What has changed is the shape and consistency of the public sphere. In the past, a guy like Shkreli might spout nonsense like “Bring me a hair from Hillary Clinton’s head!” from a barstool — until the bartender cut him off — but no one would hear him past the end of the bar.

Now, there’s social media, and any idiot with the ability to create a username and password — not a high bar — can immediately have a reach that mass media outlets in the past would have envied, instantly sharing his ravings with the entire planet without having to pay a dime to do so. And this virtual social sphere, not having had thousands of years to develop customs and standards, is a verbal Wild West.

Outside this blog and other mediated spaces, there are no rules. Of course, some people — being civilized souls — will restrain themselves. Civilization is not entirely dead. But millions of others will not, and will revel in the lack of constraints.

And while Shkreli is an unusual, extreme case, this lack of constraint is particularly common among certain demographic subsets. Forgive me for stereotyping, but I’m mostly picturing disaffected young men, who care nothing for civility toward society as a whole but will go to any extremes to draw the attention — and possible approval, even admiration — of others like themselves.

Whether you’re talking Pharma Bros or Bernie Bros or Neofascist Bros or simply fraternity bros, we are unfortunate enough to live in a time when it’s harder to simply ignore them and wait for them to outgrow it. And of course, the “bro” period lasts much longer than it once did, far beyond the age when they would have done a hitch in the Army and/or gotten married and had kids of their own and otherwise taken on responsibility in the past.

And we can’t just throw them all in jail, can we?

3 thoughts on “Pharma Bro’s going to jail, but we can’t lock them all up, can we?”