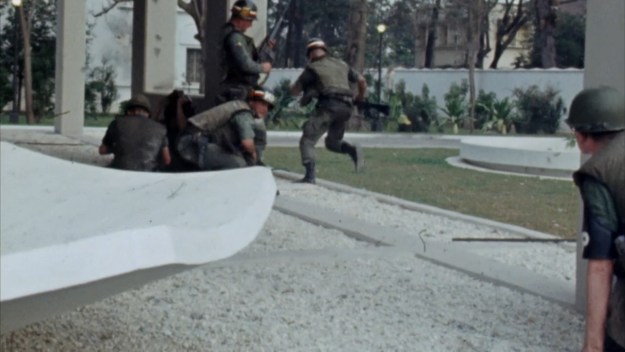 American Ms fighting the VC who had entered the American embassy compound.

I’m still a day behind — I watched Episode Seven last night — but I’ll get there eventually.

To me, this episode — which dealt with the period of the Tet Offensive — was all about the power of expectations and perception.

The offensive was, of course, a tremendous failure for the North Vietnamese and Viet Cong — tactically and strategically, in terms of what they hoped to achieve.

The communists attacked everywhere, and were defeated everywhere — badly defeated. Their losses were horrific. And their strategic goal — of inspiring the people of the South to rise up and support the North’s cause — was a complete failure. None of the Southern provinces rose up. The people of the South, along with the Americans, fought back fiercely and with devastating effectiveness. The NVA and Viet Cong were crushed.

It was the sort of thing that, were you an American or South Vietnamese military commander, you might wish the North would do once a month, the result was so damaging to the North’s ability to wage war.

But that’s not how it played in America. In America, it played as “They can rise up everywhere at once? Some of them got inside the U.S. embassy compound?” The enemy wasn’t supposed to be able to do that. (And yes, American commanders’ overly rosy assessments of how the war going had something to do with that.)

That’s when, as the title of the episode suggests, things began to fall apart. The enemy launched the offensive on January 30, 1968. On March 12, LBJ suffered a terrible setback in the New Hampshire primary.

Mind you, he didn’t lose. Again, we’re talking expectations and perception. He won, but with only 49.6 percent of the vote — and that’s not supposed to happen to a sitting president in his own party’s primary.

An interesting side note here: Eugene McCarthy didn’t get 41.9 percent because that many people were antiwar. As the episode points out, he did that well “even though most of those who voted against the president actually wanted him to prosecute the war more vigorously.” Stuff is often more complicated than we remember.

But the president was expected to win 2-to-1, so that means he lost. Expectations and perception.

Four days later, Bobby Kennedy announced he would run. On March 31, Johnson announced that he was bowing out: “I shall not seek, and I will not accept, the nomination of my party for another term as your president.” (Wouldn’t it be nice if it were so easy to get Trump to quit?)

Tet, and that political defeat of the once all-powerful Johnson, made it respectable for serious Democratic politicians to be against the war. We’d fight on for five more years, but this is where the conversation that led to withdrawal started to get serious.

In a way, despite getting creamed on the battlefield, the North had achieved what Hitler failed to do at the Battle of the Bulge. He had hoped to shock the overconfident Western Allies — who had been talking about the war ending by Christmas 1944 — into losing heart, perhaps even seeking a negotiated peace so he could turn and use all his forces against the Russians.

So, defeat eventually translated to victory for the North….