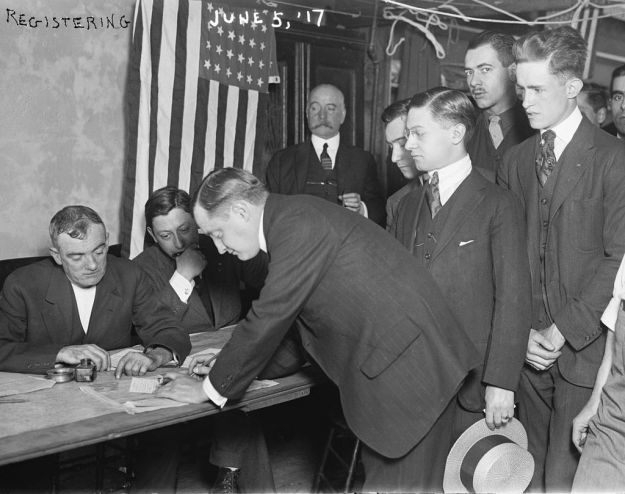 As soon as I saw this headline this morning:

Americans are stuck in bubbles. Here’s a way to pop them.

I thought, “The answer is obvious: National service.”

Y’all have heard my theory before, I’m sure: That American politics starting being nasty, with Democrats and Republicans thinking of each other as “the enemy” rather than as fellow Americans, when men who had not served together in the military started rising to top leadership positions in both parties.

Civil deliberation, a process upon which our republic relies in order to work, went off a cliff about the time Bill Clinton and Newt Gingrich rose to lead their respective parties. What did they have in common? Neither had had the melting-pot experience of military service. Before them, political leaders who had not served in uniform were rare. After them, that was the norm.

And from then on, the partisanship got worse and worse. Guys who had served together had had an early formative experienced that forced them to realize that they had something fundamental in common with other Americans, regardless of race, religion, social class, regional origin or political views. As different as they might have been going into the Army, basic training taught them they were all just dogfaces. (Those who went into the Navy, Marines and Air Force had similar leveling experiences.)

But never mind me and my theory. Richard Cohen’s column this morning makes the same point, as you can tell he’s going to do from the first graf:

I once had a very close friend named Charlie. We spent every day together, and much of the night, too. I got to learn about his family and old neighborhood, and he got to learn about mine, and then one day I saw him no more. I went my way, and he went his, and it has been many years, but I remember him still. We had been in the Army together….

I was 23, an erstwhile claims guy for an insurance company who had been plodding through college at night, six credits a semester. At Fort Dix and later Fort Leonard Wood, I got thrown in with country boys who had never had a toothbrush (the Army gave them false teeth) and tough city kids who strutted the barracks by day but cried for their mothers in their sleep at night.

I learned about their lives, even their sex lives (I will spare you), and I got to like them, and some of them liked me as well. We all had the same goal, which was to get through training. We all dressed alike, ate the same food, showered together and, over time, became a single unit. I mostly hated the Army, but I mostly loved those guys.

Now the Army is for volunteers only. Now affluent kids go to schools and colleges with similar people and, afterward, work is usually not much different. They don’t know anyone who never used a toothbrush or cries in the night for his mother or speaks in a Southern accent so thick in molasses it might as well be a foreign language. These folks do not, in short, know America….

OK, I’ll stop there lest I get in trouble with the Post for exceeding Fair Use. But you get the idea.

You should read the whole thing, and when you do you’ll find that Cohen is not advocating a reinstatement of the draft.

Nor am I, at least at this moment in our history. Reinstating the draft would be problematic today. To cite but one problem, it would be politically difficult to institute a draft of males only. I’m not going to get into why I’d oppose drafting women and girls today; I’ll just say that I (and a lot of other people, including many, I suspect, who wouldn’t admit that was why they opposed the draft) don’t hold with it. Besides, the generals don’t really want draftees anyway — they much prefer to command patriotic and motivated volunteers, and it’s hard to blame them.

So it’s hard to make the argument right now that it’s a national security necessity.

Another problem I have is that as great a unifier as the draft was in its time, it was far from perfect. For instance, it left out guys like me. I’ve always sort of resented that — I’m a fairly healthy guy who could have made a contribution. At the same time, I can understand not wanting a soldier who, separated from his medications, could have an asthma attack in the middle of a battle and let the unit down.

But surely I could have been useful. That’s why I join Cohen in calling for a broader sort of national service that includes everybody, as they have in such places as Denmark, Sweden, Austria and Norway.

And it would send my libertarian friends ’round the bend, so there’s that cherry on top as well…