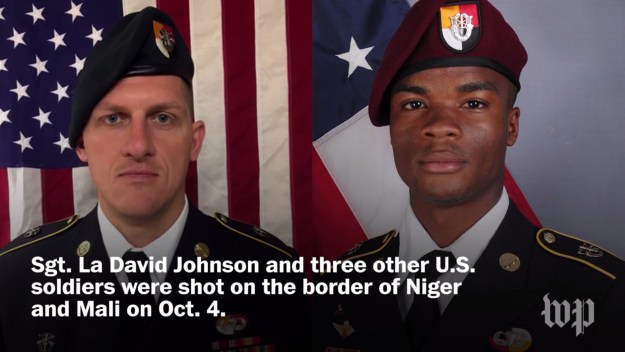 Today, NPR raises the question, “After Controversy Over Condolence Calls, Can Trump And The White House Refocus?

The answer to that, we’ve all learned, is probably “no.” Even if the White House does everything it should, and resolves to move forward and concentrate on other things, Trump will get up at 6 the next morning, if not earlier, and blow it all with a Tweet. We know this.

But yeah, it would be nice not to have to hear about any of this any more, at all.

For the widow, Myeshia Johnson, the pain must go on. I pray that God send his healing grace upon her and help her through this nightmare, but we know the loss will always be with her. She has received the call that my family dreaded the full year of my Dad’s tour in Vietnam, and her loss is real and profound and permanent.

The best we can do for her right now is honor her fallen husband, and stop intruding on her grief, and stop dragging it into politics.

This whole thing has been SO unseemly from the start.

And how did it start? With Donald Trump trying to do something that has rightly or wrongly become part of the job of president, something he is particularly ill-equipped to do. But at least he was trying.

And, because he is so ill-equipped on so many levels, it went badly. The widow says he made things worse.

It’s not necessarily that the words he said were so awful. In defending him, Chief of Staff John Kelly said that the friend and fellow general officer who consoled him when his son was killed used similar words, telling him that that the young man was doing exactly what he wanted to do, that he knew what he was getting into by joining the military in wartime and that he was surrounded when he died by the “best men on Earth.”

(Kelly having to tell this story is another of the awful things about this controversy. Up until then, he had extremely careful to keep his grief private and out of the political sphere.)

Of course, that plays one way when one Marine says it to another Marine, his good friend, who himself has sent men in harm’s way. That’s a conversation within the brotherhood. It plays differently when Mr. Bone-Spur Deferment says it to a grieving widow.

Then we had the whole business of the Democratic congresswoman (who surprisingly is not from Texas) having been with the widow during the phone call and backing the story that the president had said the wrong things, then Trump lashing out childishly with lies about Obama not having made condolence calls. (This is standard with Trump and his supporters — when criticized, they yell, “Hillary! Obama!” It matters not at all to them that it’s almost always a non sequitur.)

You had Trump stating he had called all families of those killed in action, and the press checking it out and finding he’d called about half of the ones reporters could reach.

And then, at one point, we had the sideshow — leading The Washington Post‘s website for a time — about a grieving father whom Trump called. This father griped to Trump about not receiving survivor’s benefits — they were going to his ex-wife, the mother — and Trump promised to write him a personal check for $25,000, but the Dad says he didn’t. (The White House later said the check is in the mail.) I just don’t even know how to count up how many ways that story is tawdry and cringe-inducing…

Before the week was out, there was also the business of John Kelly helping Trump lash out at the congresswoman, and saying something untrue and unfair to her in the process. Then there was the funeral over the weekend, and just this morning the widow appearing on “Good Morning America” to share what she thought of Trump…

It’s just all so awful, so disheartening. Whether you care about respecting the sacrifice of a soldier, or the dignity of the presidency, or just normal, everyday human decency, it’s been an unpleasant spectacle.

And even though I know whatever this president moves onto next will probably be just as unseemly, I for one am ready for the moving-on part…

77 thoughts on “Enough with Trump’s call to the widow, please!”