Several news outlets, including The Washington Post and The New York Times, are leading with this story:

Top House Republicans said they will consider restricting “bump stocks,” the firearm accessory used to accelerate gunfire in the Las Vegas massacre, opening the door to heightened regulation in response to the tragedy.

“Clearly that’s something we need to look into,” Ryan said on MSNBC…

Before reading that this morning, I’d heard Tom Cole, a GOP congressman from Oklahoma saying similar things on the radio. 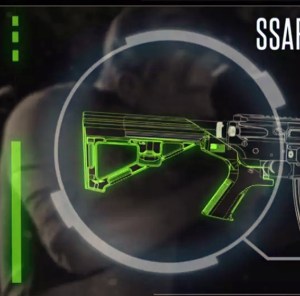 Image from website of Slide Fire, which sells bump stocks.

Insert joke about temperatures of 31 degrees Fahrenheit being reported in Hades.

A bipartisan move on limiting some way of making it easier to kill lots of people with firearms might feel like progress.

But will it help? I don’t know. Maybe.

An aside… I’m not entirely sure I understand how these “bump stocks” work. It sounds like they harness the recoil to cause the trigger to repeatedly press itself against the shooter’s finger. I think.

“Automatic rounds” are not a thing. Does CBS want to hire anyone who knows even a little bit about how firearms work? https://t.co/SQsA2KXm2P

Meanwhile, I’m puzzling on something that probably only interests me, being a guy who used to spend my days making news play decisions…

If you regularly read British publications (which I do, as I like to know what’s happening in the rest of the Western hemisphere and U.S. outlets don’t tell me), you know that they take a certain view of U.S. news. They have a morbid fascination with what they see as our utter insanity on guns.

Which is why I’m puzzled that, instead of leading with this remarkable bipartisan movement on guns, both the BBC and The Guardian are leading with reports that the Las Vegas shooter may have planned to escape and may have had help. Which is admittedly a strong news development, but still…