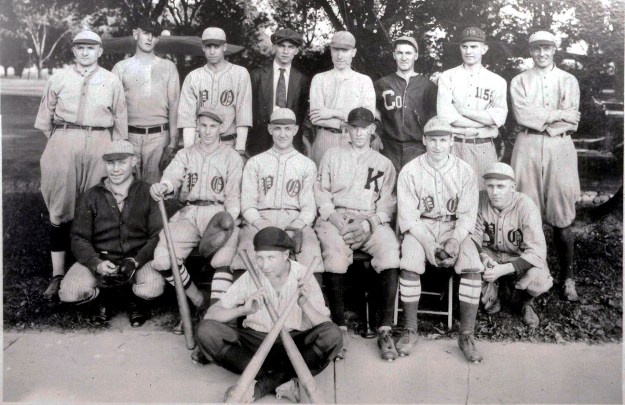 I want to thank all those dozens of folks for wishing me joy of my birthday on Facebook.

I like the picture one of my cousins posted to mark the occasion. That’s it below at left. That’s me with my grandfather, Gerald Harvey Warthen, when I was about 4. 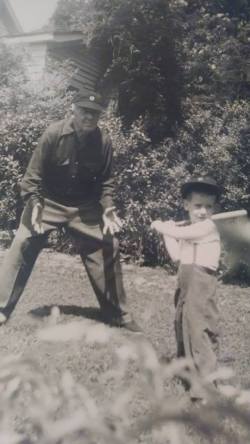 This shot is meaningful to me because my grandfather was a serious baseball player. As a young man in Kensington, Md., that’s what he was all about. He had a job with the Postal Service at one point, just so he could pitch for their baseball team. He was offered a contract by (I think) the Senators’ organization, but ended up working in his father’s construction business instead.

But his legend endured in Kensington. My Dad grew up there being known as “Whitey” Warthen’s kid. That was his baseball name — like Ford and Herzog.

I did not, I regret to say, get to grow up with my grandfather, as he died of lung cancer within a year of the photo being taken.

Above, you see him as a young man with one of the teams he played for. He’s squatting at the right of the photo, with a steely gaze that says to me, “Enough of this stuff! Let’s play ball!”

Looking much less intimidating, you see me below with the only organized team I ever played on, the MacDill AFB senior Little League team. I guess I was about 14. I’m on the left end of the back row, standing next to the white-shirted coach. The only thing I seem to have in common with my grandfather here is that I, too, look like I’m ready to have the picture-taking over with. Or maybe it’s just that I’d removed my glasses for the picture, and couldn’t see anything.

I hadn’t played organized ball before that because we moved almost every summer. This was late to start, and while I’d been a good hitter in sandlots (where the idea was usually to put the ball across the plate and put it in play), I had a terrible time adjusting to people trying to throw the ball past me. I tended to swing late.

So it is that I’m particularly proud of my one highlight of that undistinguished year: I broke up a no-hitter in the fifth inning (of seven). This redheaded pitcher on the opposite nine was just overpowering everybody, but I got an opposite-field (still swinging late) line drive off him for a single. So they took him out of the game. That’s it — my one story of baseball glory.

Needless to say, no Major League team ever offered me a contract… 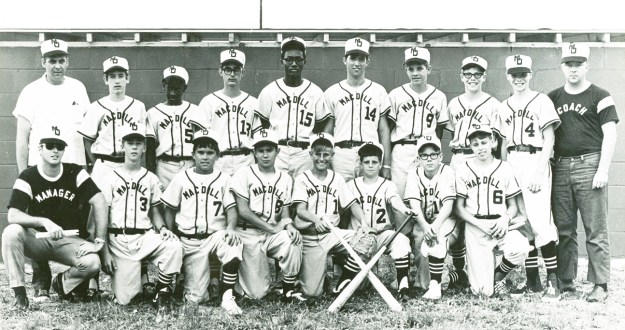 17 thoughts on “It’s my birthday, so… more baseball pictures!”