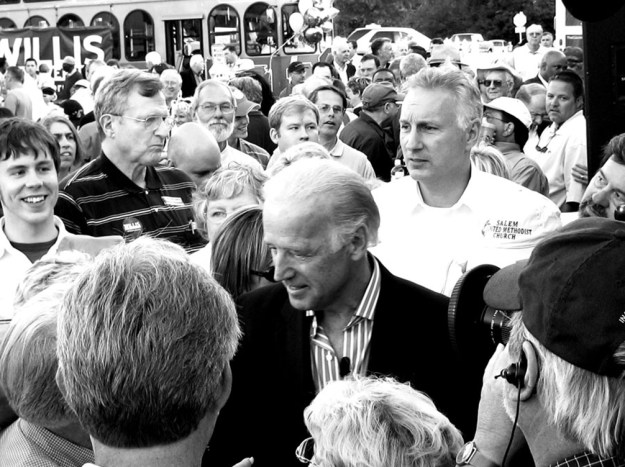 Biden at the Galivants Ferry Stump Meeting in 2006.

Seeing that Jim Hodges had become the latest Democratic heavyweight to endorse James Smith for governor reminded me that I meant to go back and read the P&C’s story in which Joe Biden explained why he’s backing Smith.

Here’s hoping the Charleston paper doesn’t mind if I share a good-sized chunk:

Why Biden is backing Smith: “I have met a lot of guys in my career … but this is a guy, I swear to God, that I would trust with anything. This is a guy who I watched, he never puts himself before anybody else.”

“He’s not about tearing the house down. … I look at him and I think this is a guy with the energy, the integrity, the experience that can really have South Carolina get up and start to walk.”

How Smith reminds Biden of his son: He said Smith possesses the sense of duty of his late son, Beau, who passed on taking his father’s Senate seat when Biden become vice president to remain Delaware’s attorney general. Both younger men went on military deployments to the Middle East while in political office.

“They’re kindred spirits. … I know it sounds corny but it comes down to honor, duty and again the guy (Smith) has all tools. He knows the issues. His instincts are right. He thinks you should be able to make a billion dollars if you could, but you ought to take care of people and just give everybody a chance.

“I remember saying to him once that I thought that one of the problems with the elites in both our parties, we don’t have a lot of faith in ordinary people any more. And James started talking about his grandfather and great-grandfather (working class men from poor backgrounds). Ordinary people can do extraordinary things if you give them half a chance. I’m convinced he believes that.”…

Sounds like he knows James. There’s a bunch more, just overflowing with Joe-ness, if you want to go read the whole piece.

I’m still waiting to hear who’s backing Phil Noble. He must be responding to something going on in the party; I’m just not sure what. I didn’t know there was a sizable contingent of Democrats who didn’t like James. I need to learn more…