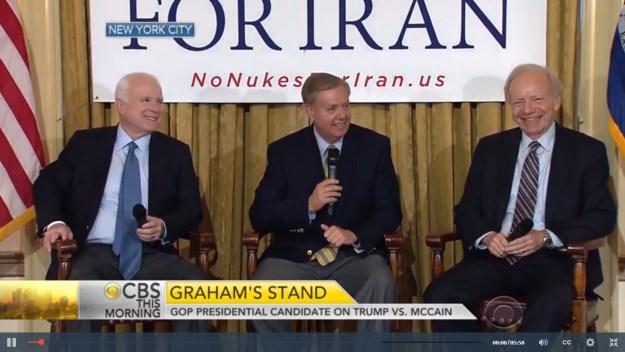 Remembering wistfully the days of the Three Amigos.

Somehow I missed this story when the NYT ran it four days ago, but my attention was drawn to it when The State ran it this morning.

The NYT’s hed was particularly disgusting:

As Other Republican Senators Bolt, Lindsey Graham Cozies Up to Trump

Kinda makes you want to hurl, doesn’t it?

“He’s very popular in my state,” Mr. Graham continued. “When I help him, it helps me back home. And I think it probably helps him to be able to do business with an old rival who’s seen as a deal maker.”

To Republican critics of Mr. Trump, Mr. Graham is risking his reputation with such a calculus.

“Lindsey Graham knows better,” said Peter Wehner, who advised former President George W. Bush and is a contributing opinion writer for The New York Times. “Deep in his heart, he must know that Donald Trump is fundamentally unfit to be president, and he has to pretend that Trump is. And when you engage in a game like that, there’s often a cost to it.”

Mr. Graham is willing to take the risk….

It’s really a shame to see this. Especially when Lindsey’s best buddy John McCain, as sick as he is, is determined to go down swinging against the guy Graham once quite rightly termed “the world’s biggest jackass.”

Because the thing is, he does know better. And therefore, he owes us better…

12 thoughts on “What a disgusting headline about Lindsey Graham”