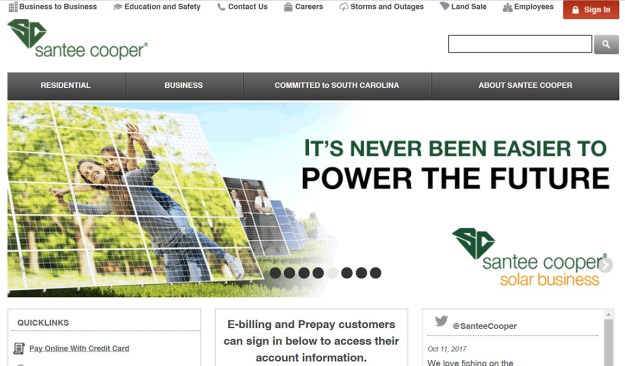 Today’s story in The State told us that lawmakers want the governor to hold up a bit and loop them in on talks about selling Santee Cooper.

What they did not address, at least to my satisfaction, is the larger question: Why sell Santee Cooper?

In the normal course of things, it seems an idea worth exploring: Why should the state operate a utility, now, in the 21st century? We’ve pretty much made it through the rural electrification phase of our development.

But in the context of the current scandal over the nuclear plant fiasco, it makes less sense. To me, anyway.

I mean, isn’t everybody kind of ticked off that Santee Cooper — and SCANA — were out of control on this thing?

Wouldn’t the natural reaction under such circumstances be to think, “Hey, we own Santee Cooper. Since we own it, we can get it under control.” If the current laws and regulations don’t allow for that kind of control — and it appears they don’t — then change the laws and regulations.

But don’t sell it off to some out-of-state conglomerate that won’t give a damn what we want the utility to do and to be.

Isn’t there something kind of irresponsible in state officials wanting to wash their hands of the utility at this particular moment? Isn’t this kind of a backwards reaction?

There’s probably a flaw in my thinking on this that is obvious to everybody but me. Please, somebody explain it to me…

5 thoughts on “Why should we sell Santee Cooper, especially now?”