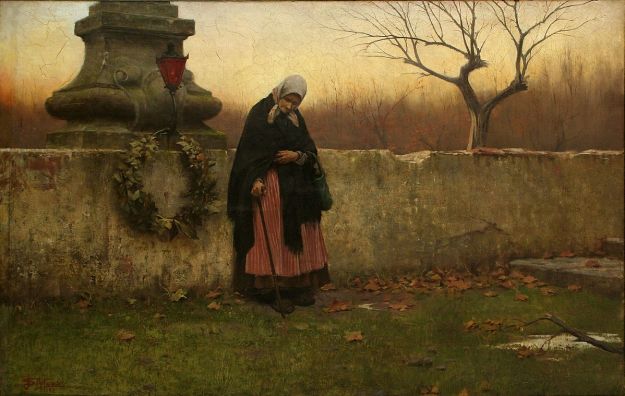 Earlier this week, the lady who schedules us lectors and eucharistic ministers sent out an email looking for volunteers for the Masses on All Saints Day. I wrote to her to say I could serve at the one at noon, but couldn’t do the evening Mass because of the debate.

But I had to ask her a dumb question, just to be sure: You’re talking about Wednesday, right?

As a convert, I still get confused by some stuff cradle Catholics take for granted, and the distinction between All Saints’ Day (yesterday) and All Souls’ Day (today) is one of those things.

But because we have so much to learn, we examine these things more closely. And an unexamined life, etc.

So I sort of enjoyed this email from Kyle Michel, who like me grew up Southern Baptist before marrying into a Catholic family:

All Souls Day has always been kinda intriguing to me. The idea of praying for all souls gone before you makes you wonder where the heck they’ve all gone. Maybe my Jewish friends are right – you’re here, you make your mark, you’re gone. Or, maybe there’s some kind of next stage – put whatever label you want on it. It would be hard to say that every person who has ever seen a ghost or had some paranormal experience was just imagining it. But everybody who ever died can’t be hanging around or the whole world would look like that Michael Jackson Thriller video. ​
I grew up Southern Baptist and we never had All Souls Day. According to the Baptists, there’s just no need – God’s already sorted them out, no need for further input. The Catholics have more of a Jesse Jackson approach – Keep Hope Alive! That Catholic approach seems a little better suited to a procrastinator like me – give it your best shot while you’re still breathing, but if you fall a little short, you’ve still got a chance.
Though, for Catholics, All Souls Day is still a little uncomfortable because you’re supposed to pray for all those in purgatory, which means you gotta make a call on who you think didn’t quite make it in – awkward!  At the funeral, everyone makes it in, right? Now, I gotta admit I think Uncle Freddie never made the cut!
Lucky for us, this year All Souls Day falls on First Thursday, so you can come down to Main Street and spend the evening thinking about all your dearly departed while walking among your not-yet-departed who probably still need a little prayer themselves.
If you’re out, stop by. We’ll be here at 1520 with our usual fare and selling the records of some of the souls we’re praying for – including a few of those “under-the-counter” ones that belonged to Uncle Freddie.

Kyle sends out these emails every First Thursday, inviting folks to drop by his law office on Main Street. He has the most awesome record collection I’ve ever seen outside of Nick Hornby’s High Fidelity, and he puts out some of his treasures out to sell from tables on the sidewalk.

You should check it out tonight. I can’t, because I’m doing another Catholic thing: I’m going to the annual Bernardin Lecture. Kristin Heyer of Boston College will speak on “Immigration Ethics in a New Era.”