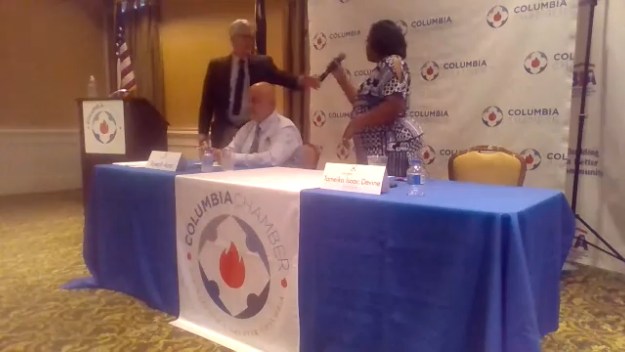 Having only one microphone was a bit awkward…

When I’m moderating a debate, I’m always thinking about too many other things — keeping an eye on the timekeeper, shuffling through questions from the audience, picking the next question — to take notes on what is actually being said. I mean, I hear this and that, but I can miss the overall flow, and I wouldn’t trust myself to report on it.

Fortunately, the Chamber streamed last night’s city council forum on Facebook Live. This is good for those of you who’d like to hear what the candidates said, and bad for me, because I find my own fidgeting and rocking back and forth in the background too distracting when I try to watch it.

If you’re only interested in one of the two races, we did the at-large contest between incumbent Tameika Isaac Devine and Joseph Azar first, then you see the candidates for District 1 — incumbent Sam Davis and Chris Sullivan — starting at -49:18.

If you’d like to read what the candidates said, Chris Trainor of Free Times Tweeted extensively during the event.

My main aim was to have an informative event that focused on issues rather than irrelevancies. I was pleased that Chris Trainor’s last Tweet said this:

After last week’s wild debate, and a juicy campaign, the Dist. 1 candidates pivoted to issues tonight.