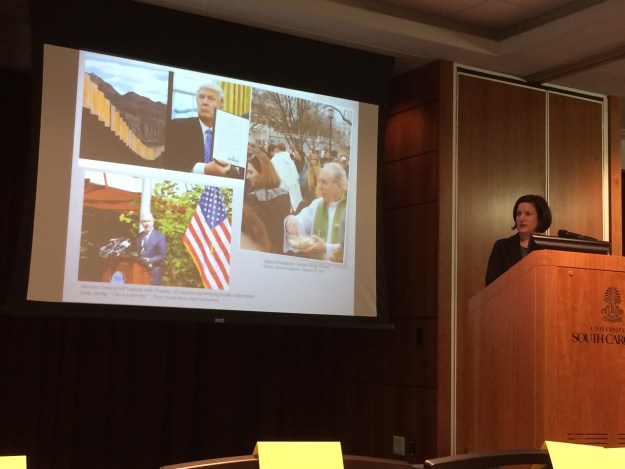 Dr. Heyer during her lecture.

This past Sunday, I did the first reading at the Spanish Mass, the first time I’d done so in awhile.

It was from Exodus Chapter 22. Here’s how it began:

Thus says the LORD:
“You shall not molest or oppress an alien,
for you were once aliens yourselves in the land of Egypt.
You shall not wrong any widow or orphan.
If ever you wrong them and they cry out to me,
I will surely hear their cry.
My wrath will flare up, and I will kill you with the sword;
then your own wives will be widows, and your children orphans….

Because I had just read that Sunday (after a lot of practice that morning, which I have to do with Spanish these days), I was struck to hear the same message again last night, when I attended this year’s Cardinal Bernardin lecture at USC.

Our speaker was Kristin Heyer from Boston College, and the rather involved title of her lecture was “Immigration Ethics in a New Era: Embracing Cardinal Bernardin’s challenge to be both ‘prophetic and public’ amid the contemporary political climate with respect to migration.”(Headline writing isn’t a core strength of academics, I find.)

I won’t go into the whole thing, except to say that the message was not, shall we say, Trumpian.

But I was struck at the serendipity of her slide citing numerous biblical injunctions to be good to the alien. The first one she cited was from the chapter after the one I had read from in Exodus, and it’s a stripped-down, to-the-point version of what I had read:

You shall not oppress a resident alien; you well know how it feels to be an alien, since you were once aliens yourselves in the land of Egypt…

That was Exodus 23:9. Think maybe somebody’s trying to tell me something this week? 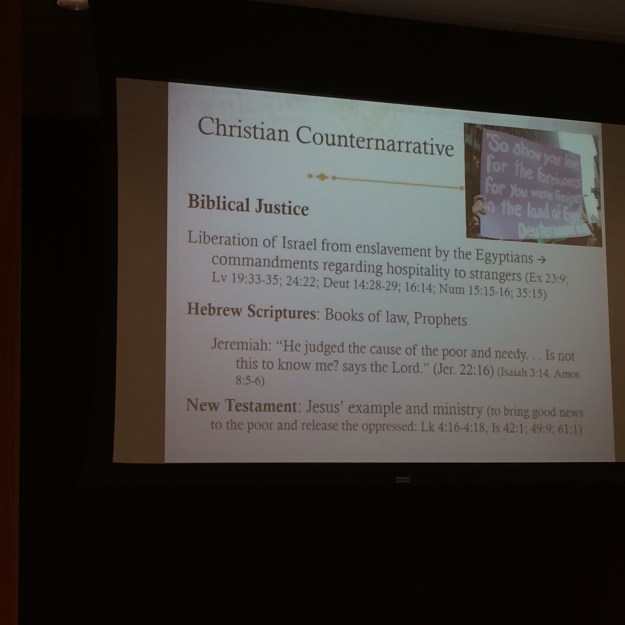 3 thoughts on “‘You shall not molest or oppress an alien…’”