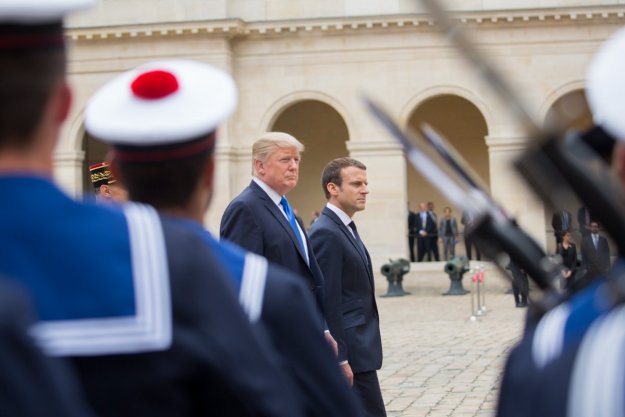 It’s not easy to keep a republic going. Ask the French — they’re on their Fifth, in less time than we’ve had one.

Some good people who place their faith in the rule of law may have gained encouragement from the guilty plea of Michael Flynn. After all, this is the case that Trump tried to get Comey to back off on, before firing the FBI director. Time to start up the impeachment apparatus!

Others will cite the continuing stream of evidence that the president is not right in the head, from making “Pocahontas” jokes when he’s supposed to be honoring the Navajo Code Talkers to telling people that he doubts that was him on the “Access Hollywood” tape — more than a year after admitting that it was. Obviously, a case for the 25th Amendment!

But setting aside the facts that a) Republicans would have to initiate and drive either of those processes for removing a grossly unfit president, and b) Republicans have shown us time and time again that they are too terrified of Trump’s supporters even to mutter a word against him, I don’t think it’s time to get optimistic that this madness will end soon.

Even if Republicans were ready, willing and able to take those steps, I’m pretty sure the original problem would remain: Trump’s fans would go ballistic.

The terrible truth that faces us is that no amount of evidence of Trump’s unfitness is likely to ever persuade these folks of the truth. They are inoculated against evidence. If the truth makes Trump look bad (and it most assuredly does), then to them it’s not the truth; it’s “fake news.” As unlikely as it would seem to most rational people, they actually seem to believe that. But whether they believe it or not, they act as though they do, which is what matters.

But so what? Most of the country can’t stand Trump, so those people can’t control what happens! Right?

Wrong, at least so far. Remember, most of the country held Trump in contempt at the time of the election, and yet here we are. More importantly, since the early 90s Republicans have been enormously successful at drawing electoral districts so that most of them are safe for Republicans. This, however, instead of empowering the people who drew those lines, has undermined them. It has caused them to walk in fear of someone running to the right of them in their next primary. Consequently, as a result both the election of a lot of those extremists and the fear of such occurrences on the part of more moderate Republicans, the party has moved farther and farther out onto its own fringe.

Even if the current GOP House got up the nerve to impeach Trump, it’s highly likely that what they fear would occur: They would be replaced by others who are more extreme than they are.

But forget the insidious effects of gerrymandering. The fact is that the nation can ill afford to have the Trump bloc, minority though it is, believing they were cheated out of having their guy in the White House. I’m not talking about armed insurrection here, although we can’t totally rule that out. I’m saying our system of government would have its greatest crisis of legitimacy it has ever faced. (At least, since 1860-65.)

Remember the snit fit Democrats had after Gore was found to be the loser in Florida (and he was the loser in Florida)? It went on for eight years, and many of them still believe the U.S. Supreme Court “stole” the election and “gave it” to Bush. And these were relatively sensible people, not a cult that worships at the altar of “alternative facts.” (In fact, there was one way you could have counted the votes so that Gore won — just not the way Gore had demanded they be counted. That way, and most ways, he lost.)

There is already ample evidence that the common vision of what America is all about has largely been lost, and not only among Trump voters who think “liberal democracy” means a democracy run by Nancy Pelosi. David Brooks had a good piece on that a couple of weeks ago.

As divided as we are, can you imagine what it would be like if some 30 percent of the electorate — a bloc utterly immune to contrary evidence — was convinced that it had been robbed?

How would we ever get back on an even keel? And even if the next occupant of the Oval Office is the best president we’ve had in 50 years, how would he or she lead us?

There was a thoughtful piece in The Washington Post today arguing that the only good way to get rid of Trump will be at the ballot box in 2020. But given the facts on the ground at this moment, can we even be confident that that would happen?

(Get back to me in a few days. I’m still reading Tom Holland’s Rubicon, and I’ve finally gotten up to the events of 49 B.C., and steeping oneself in that era is not a thing likely to inspire confidence in the staying power of republics…)

To cross or not to cross? Either way, the Republic’s pretty messed up…

42 thoughts on “Hate to say it, but I don’t see this Trump thing ending well”