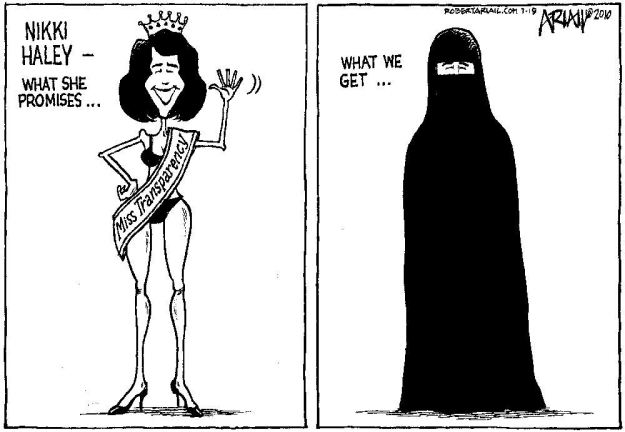 The cartoon that started the fuss back in 2010. In case you forget, it was about Nikki Haley calling for transparency for everyone but herself…

Google Adsense — the folks who place the more random-seeming ads on this blog — sent me this warning recently. I just wish I knew what it was I did that they don’t like — because while the money I get from Google for those ads is a tiny trickle, it’s better than nothing, so I’d hate to see them pull the ads altogether.

Here’s what they said:

The particular post that is seen as being in violation was this one from 2010, in which I rebutted people who were offended by a Robert Ariail cartoon. All Google tells me is that it contains “Dangerous or derogatory content.” Google further defines that this way:

Of course, neither my post nor Robert’s cartoon did any of those things, although there were people who managed to twist logic enough to be offended. Perhaps one of them complained to Google. Well, sorry, folks, but this is a political commentary blog, and that cartoon was legitimate commentary that made a highly relevant political point at the time.

Even if you do find a way to be offended, it completely escapes me how this seven-year-old post constitutes a “new violation.” This post was old and moldy before I ever started running Google ads. And the last comment on it was posted on Aug. 14, 2010. There’s nothing new there. In fact, reading over it just now I found some glaring typos, but I’m not going to touch them in case that makes the post more current to some algorithm out there.

You’ve requested a review for this page and we’re currently looking into it. Reviews typically take 1 week but sometimes can take longer. We’ll let you know when the review is complete.

4 thoughts on “Anyone have any idea what I’m doing that bugs Google?”